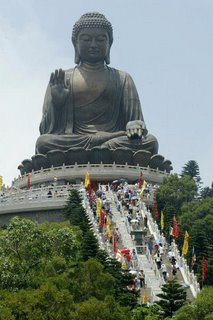 American Foreign Policy Council, Washington, DC
China Reform Monitor No. 623, April 19, 2006 - Chinese agents disguised as Tibetan Lamas have been entering Taiwan with forged documents after infiltrating Macau, India, and Singapore via Nepal. Taiwan's Central News Agency reports Taipei is raising concerns that PRC operatives disguised as lamas "lure influential political figures from the political and business sectors, posing a threat to national security." Taiwan is in the process of creating a process to weed out the imposers through document verification and Tibetan and Nepalese language examinations.

China hosts the World Buddhist Forum this week while the Chinese government is denying charges that the Falun Gong are being held in concentration camps. This is its first international religious meeting since the Communists swept to power more than five decades ago.

I don't suppose the 70+ million Buddhist Falun Gong in China are invited to the round table. Either way they're too busy (Hmmm!) having their organs harvested to profit the butchers of Beijing who use the Falun Gong as commodities. Shame on China for putting up this front while the CCP endlessly tortures the Falun Gong in the backroom.

Before we get to the article, please take a look at Communist China's history to get a feel for the situation via an excerpt from the Nine Commentaries on the Communist Party:

On How the Chinese Communist Party Destroyed Traditional Culture

Part 6: “The CCP killed people like flies during the "suppression of counter-revolutionaries." [49] The political monks thereupon cooked up the justification that "killing the counter-revolutionaries is an even greater compassion." During the "War to Resist US Aggression and Aid Korea" (1950-1953) [50], monks were even sent directly to the front line to kill.

Take Christianity as another example. In 1950, Wu Yaozong [51] formed a "Three-Self" Church, which followed the principles of self-administration, self-support and self-propagation. He claimed that they would break away from "imperialism" and actively join the "War to Resist US Aggression and Aid Korea." A good friend of his was imprisoned for over 20 years for refusing to join the Three-Self and suffered all kinds of torture and humiliation. When he asked Wu Yaozong, "How do you regard the miracles Jesus performed?" Wu answered, "I have discarded all of them."

Not acknowledging Jesus' miracles equates to not acknowledging Jesus' heaven. How can one be counted as a Christian when one does not even recognize the heaven Jesus ascended to? However, as the founder of the "Three-Self" Church, Wu Yaozong became a member of the Political Consultative Conference standing committee. When he stepped into the Great Hall of the People [52], he must have completely forgotten Jesus' words. "Thou shalt love the Lord thy God with all thy heart, and with all thy soul, and with all thy mind. This is the first and greatest commandment." (Matthew, 22:37-38) "Render therefore unto Caesar the things that are Caesar's; and unto God the things that are God's." (Matthew, 22:21)

The CCP confiscated the temple property, forced monks and nuns to study Marxism-Leninism in order to brainwash them, and even forced them to labor. For instance, there was a 'Buddhist workshop' in Ningbo city, Zhejiang Province. Over 25,000 monks and nuns were once forced to work there. What is more absurd is that the CCP encouraged monks and nuns to get married so as to disintegrate Buddhism. For example, just before the March 8th Women's Day in 1951, the Women's Federation in Changsha city, Hunan Province ordered all nuns in the province to decide to get married in a few days. In addition, young and healthy monks were forced to join the army and were sent to the battlefield to serve as cannon fodder! [53]

Various religious groups in China have disintegrated under the CCP's violent suppression. The genuine elites of Buddhism and Taoism have been suppressed. Among those remaining, many returned to secular life, and many others were undisclosed Communist Party members who specialized in putting on kesa robes, [54] Taoist robes or pastor's long gowns to distort the Buddhist Scriptures, the Taoist Canon and the Holy Bible and to look for justification for the CCP's movements in these doctrines."

Organizers timed the forum to coincide with the Christian festival of Easter, sources said, apparently to send a message of China's greater religious tolerance to church-going President Bush ahead of his summit with Chinese President Hu Jintao later this month.

Some 1,000 monks and Buddhist experts from 30 countries will gather in the scenic eastern city of Hangzhou for the forum which starts on Thursday and winds up in nearby Zhoushan on Sunday.

"The Communist Party has come a long way from uncompromising Marxist-Leninist-inspired atheism to a far more lenient and tolerant attitude toward religion," a Western diplomat said.

The theme of the forum -- "a harmonious world begins in the mind" -- mirrors Hu's campaign to build a "harmonious society" in the face of rising unrest at home.

"This is an unprecedented grand gathering in Chinese Buddhism's 2,000-year history," Ye Xiaowen, director of the State Bureau of Religious Affairs, wrote on the forum's Web site.

There also has been talk of China forging ties with the Vatican by 2008 and a possible warming toward Tibet's exiled god-king, the Dalai Lama. A Tibetan nun jailed for 15 years was allowed to seek medical treatment in the United States last month.

Such moves, however symbolic, may provide Hu with a list of concessions on religion with which to temper any U.S. criticism during his visit, analysts said. But critics dismissed the moves as a public relations exercise.

The Vatican estimates about 8 million Chinese Catholics worship in underground churches loyal to the Pope, compared with 5 million members of the state-controlled Catholic association.

China is generally less fearful of Buddhism, with its home-grown roots, than other religions, even though many Tibetan monks and nuns have been jailed for their loyalty to the Dalai Lama, whom Beijing accuses of pushing for independence.

Religious freedom is enshrined in China's constitution, though. The world's most populous nation has about 100 million Buddhists, some 20,000 temples and around 200,000 monks and nuns.

But during the chaotic 1966-76 Cultural Revolution, monasteries were closed, statues smashed, religious texts burned, and monks and nuns forced to return to secular life.

China has since sought to control but not stifle religion in a society where an ideological vacuum has spawned corruption and eroded ethics in the post-Mao era.

But in the face of rising unrest -- 87,000 public order disturbances last year -- China has no qualms about crushing any challenge to its rule, banning the Falun Gong spiritual movement as an evil cult in 1999 and jailing thousands of its adherents.

Two of the top lamas of Tibetan Buddhism will not attend the forum. The Dalai Lama has lived in exile in India since 1959 when he fled his Himalayan homeland after an abortive uprising. A youth backed by the Dalai Lama as the Karmapa Lama, the third-ranking monk, arrived in India from Tibet in 2000.

Qi Xiaofei, vice-president of the China Association for Religious and Cultural Exchanges, said the Dalai Lama was not a purely religious figure and accused him of "splitting the motherland and sabotaging ethnic unity."

The Dalai Lama would be an "unharmonious voice" if he attended the forum, Qi told a news conference, but added the government's desire for harmony did not mean it was unwilling to have exchanges with those who hold different views.

"We want dialogue, not confrontation," he added.