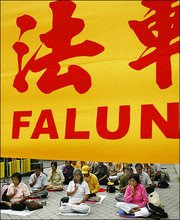 By The Canadian Press via Canadian Business: TORONTO - More than 200 Falun Gong practitioners are protesting the arrival of China's president for the G20 outside the Chinese consulate in Toronto.

The protesters meditated to a serene melody in a fenced-off area set up by police.

One woman sat cross-legged on a table in front of a communist symbol, splattered in red paint representing blood.

Joel Chipkar, vice-president of Toronto's Falun Gong association, says the Canadian government has been bullied into silence over human rights violations in China.

The group is calling on Prime Minister Stephen Harper to raise their concerns with President Hu Jintao during the summit.

Chipkar says he is concerned the prime minister will "sell out human rights for the pursuit of the almighty dollar."

There was also a published report that Hu asked the Prime Minister's Office to keep two media outlets that have been critical of the Chinese leader, the Epoch Times and New Tang Dynasty TV, away from his Ottawa events.

"The Prime Minister's Office did not determine or request which reporters were going to be a part of the media pool that covered President Hu's visit," Harper's spokesman, Dimitri Soudas, said in an email Friday.

"The Ottawa press gallery did."

Sophie Song came to Canada from China after spending 16 months in a forced labour camp in her late 20s for practising Falun Gong.

She says she was forced to make 1,000 chopsticks each day, and if she didn't she was punished.

"I think the Chinese regime must stop the persecution. It's so evil," said Song, now 37, as she stood with her eight-year old son Jia Liang.

The protesters made space for pedestrians to walk along the sidewalk, while traffic flowed by. Several drivers honked in support.

The group plans to move their peaceful protest to the lawn of the provincial legislature for the duration of the G20 summit.