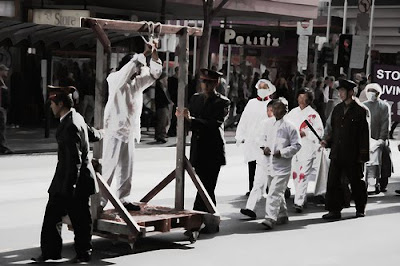 Falun Gong has the ignominious honour of leading by far the parade of human rights victims in China. They represent two thirds of the torture victims. The UN Special Rapporteur on Torture's 2006 report on his 2005 mission to China1 indicated that 66% of the victims of alleged torture and ill-treatment in China were Falun Gong practitioners, with the remaining victims comprising Uighurs (11%), sex workers (8%), Tibetans (6%), human rights defenders (5%), political dissidents (2%), and others (persons infected with HIV/AIDS and members of religious groups 2%)2.

Falun Gong represents half the people in detention in re-education through labour camps. The United States Department of State Country Reports for 2008 state:

More: Remarks delivered to an International Conference on Religious Freedom in China, European Parliament, Brussels, 15 April 2009 -
Posted by MaKina at 11:35 AM