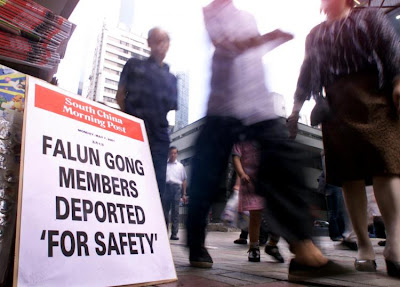 Chinese Falun Gong practitioners who want to escape persecution at home are learning that South Korea is not a country where they can seek refuge.

South Korea since 2009 has deported 10 Falun Gong practitioners back to China after courts here refused to grant them refugee status and asylum. Some of them haven’t been heard from since their return to China, according to other Chinese asylum-seekers in South Korea and human rights organizations.

South Korea has denied asylum to more than 40 other Chinese Falun Gong practitioners. It’s unclear whether South Korea has granted refugee status to anyone associated with Falun Gong, a spiritual movement that began in China about 20 years but that alarmed Chinese authorities in the 1990s because of its size and independence from the government. The Chinese leadership officially banned it in 1999 and began to imprison practitioners.

On Sept. 6, Seoul police and South Korean immigration authorities arrested Jin Jingzhe, 26 years old, and his wife Ma Yue. The couple arrived in South Korea from China in 2008. Mr. Jin, who practices Falun Gong, sought asylum but was denied. He’s now being held in a detention center in Suwon and could be deported any day. His wife was freed.

Supporters of Mr. Jin have marshaled letters from human rights groups, 23 members of the U.S. Congress and the vice president of the European Parliament to President Lee Myung-bak urging him to intercede in Mr. Jin’s case. In one such letter, Terri Marsh of the Human Rights Law Foundation in Washington wrote, “It is a certainty that Mr. Jin will be subject to torture if he is returned to China.”

Reached by phone at the Hwaseong Fortress Foreigners’ Detention Center, Mr. Jin said he was fine but declined to discuss the situation. He referred questions to his legal advisor, Oh Se-yeol, who also a spokesman for the Korea Falun Dafa Association, which is the local chapter of the organization.

Mr. Oh said he may ask Justice Minister Kwon Jae-jin to grant a humanitarian stay of the immigration court’s rejection of asylum status.

“At this stage, filing an objection is the only option,” Mr. Oh said. “If it is rejected again, Jin might be repatriated. The possibility would sharply rise.”

He added, “We hope the public will recognize the urgent situation of Falun Gong practitioners and the Korean government will make a humanitarian decision for Falun Gong refugees.”

Several human-rights groups staged a news conference late Monday about Falun Gong in South Korea. They said that, while the asylum hearings and deportations are in line with South Korean law, they may violate the nation’s responsibilities as a signer of United Nations treaties on the status and rights of refugees and the convention against torture.

Freedom, Asylum, and the Walls of the 21st Century;An interview with Michael Horowitz