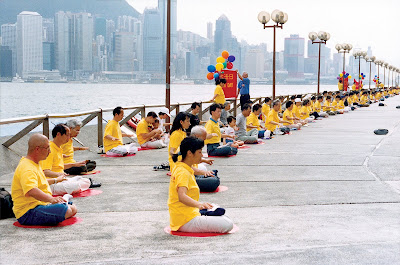 HONG KONG — Even by Hong Kong standards — where a half-dozen demonstrations occur daily — the protest over a government budget here this spring was remarkably rowdy.

An estimated 10,000 people showed up, barricades were overturned, police let fly with pepper spray, injuring an 8-year-old, and more than 110 people were rounded up and arrested.

Now, Hong Kong’s masters in Beijing want them to chill....

At issue was Hong Kong’s unique “one country, two systems” mode of governance — guaranteed for 50 years when Britain handed the colony back to China amid pomp and ceremony in 1997.

Under that agreement, Hong Kongers enjoy freedoms of which mainland Chinese can only dream.

The Falun Gong sect, for example, hated and despised as an “evil cult” by authorities in Beijing, flourishes here.

Newspaper editorials can sharply criticize the Chinese government — unheard of on the mainland.

And Hong Kong lawyers, who in China might be disappeared and tortured like Beijing lawyer Gao Zhisheng, operate freely as much-admired citizens under Hong Kong’s Rule of Law.....

In the business community, self-censorship started early, he says.

“For medium to big players, their market is in China, so they can’t be seen to be supportive of democracy because they might be blacklisted; they might not get the contract. So almost without exception the great majority of businessmen are ‘pro-China,’ because they have to ingratiate themselves with Chinese officials to get business done in China.”

Hong Kong academics who need to do fieldwork on the mainland are also wary of saying anything that might prevent them from getting a visa into China, says Lam, who also holds a teaching position.

In academic circles, “it’s actually getting worse,” he observes, as professors take care not to say anything that might “hurt their careers.”