Rage against the regime 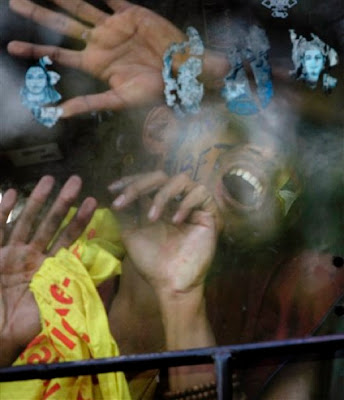 The Sudbury Star - Peter Worthington - News reports indicating that China is in the midst of another of its periodic crackdowns brings to mind a former dissident who now lives in the U.S. but still wages a campaign to persuade China into democracy.

Biaqiao Tang lives in New York and is married to the granddaughter of one of China's famous warlords, who was out-manoeuvred by Chiang Kai-shek, who in turn was snookered by Mao Zedong.

As a youth entering university in China, Tang became involved in the budding freedom and democracy movement after the death of Mao, and wanted more choice and less paranoid, dogmatic ideology governing all aspects of Chinese life.

In his new book, My Two Chinas, Tang tells a haunting story, but one that is curiously naive and ingenuous for a person who has lived -- and suffered -- through the world's most murderous and callous regime.

Tang was hounded for his leadership in student demonstrations in China around the time of Tiananmen Square in 1989, when the ruling Communist party didn't know how to cope with mounting student unrest , which was never violent but ever demanding.

Initially, soldiers sympathized with the students -- then wound up shooting them in the streets.

Tang says millions of protesting young people across China attracted workers and others to the freedom cause, and that's when the Communist party crushed all dissent.

Tang was a hunted man, and when caught was sent to prison, which involved routine beatings and tortures. His accounts are gruelling.

He tells of "lianiaokao," which is a one-metre steel bar set in the ground as a post. A prisoner's ankles are shackled to the bottom, wrists at the top, so he can neither stand up straight nor sit down, but is permanently half-crouched.

Tang recalls seeing one man kept this way for a month: "His legs and buttocks were swelled with blood. Sores appeared on his skin, and his flesh began to bloat and fester, rotting like an old sausage casing."

Another routine torture was shackling a prisoner's wrist to his opposite ankle and hoisting the free arm until the victim is forced to stand contorted on one leg. When his leg tires and he sags, his arm twists out of its socket.

Tang says most dreaded is the "barbaric" shackle board, which is a door laid flat on four short legs, with handcuffs at each corner for the spread-eagled prisoner. A hole is cut in the middle for defecation -- with the prisoner left there for weeks.

And we in the West think waterboarding is inhumane!

As was the case in the Soviet Union, many whom the system sent to the Gulag would decry, "If only Comrade Stalin knew this, it would cease," naively unaware that it was Stalin who sent them there.

This attitude enraged Yevginia Ginzburg who was condemned to the camps, and later wrote the magnificent book Into the Whirlwind.

Tang recounts how many victims of pro-democracy repression had difficulty believing the Communist party would sanction such cruelties. In the past, Canadian and American Communists had the same problem.

In passing, Tang remarks on the hatred and fear directed at the Falun Gong movement -- a non-violent philosophy of meditation and compassion that the system cannot tolerate because its popularity rivals the Communist party: "The biggest human rights issue that China faces today."

He adds: "Falun Gong is a peaceful way of life, and no threat to anyone -- unless, that is, you are a totalitarian regime, such as the Chinese Communist party."

In Vancouver, Falun Gong protesters at city hall caused the Chinese consulate to protest -- on the apparent assumption that elected Canadian politicians have an obligation to pander to Beijing's wishes.

Tang sympathizes with Tibetans, oppressed unnecessarily by China, and with Taiwan, which now functions more effi-ciently, profitably and humanely than mainland China.

On reading Tang, one wonders why he never considered cooperating with the system that offered bribes of a better life in return for his silence.

Tang's father felt as he did about freedom and democracy, but quelled such emotions and functioned within the party as a respected intellectual and teacher. While Tang was imprisoned as a traitor and counterrevolutionary, his father was killed when hit by a car.

It was ruled an accident, but Tang later discovered (but couldn't prove) that his father was murdered. He felt guilty, but understood that the villain was the Communist party.

While Tang has a better life now, his story does not inspire optimism about China. It wouldn't do our politicians any harm to read the book and decide for themselves -- and keep in mind that whatever economic benefits accrue from deals with China, their sole motivation is benefit to the regime.

Or, to quote Lenin: "Capitalists will sell us the rope with which we will hang them."