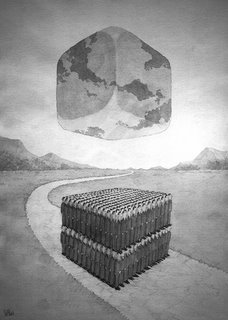 Any China crisis will have impact on Taiwan

Taipei Times: 13 Feb 2006 - In his book The World is Flat, Thomas Friedman, a US columnist who has served as a visiting professor at Harvard, sounds a warning about China's economic growth. According to Friedman, China will very quickly reach a point at which further economic growth will be impossible unless political reform takes place. Without freedom of the press, without healthy public and social institutions, it will be impossible to root out corruption. The economy will be stifled in the absence of an efficient legal system .

Friedman goes on to say that without transparency in government, without a voice for the people's complaints, there is no way that China will be able to deal with its inevitable future economic decline.

This brings to mind a recent report on views expressed by James Keith, senior adviser for the US State Department's Bureau of East Asia and Pacific Affairs, during a congressional hearing last week titled "What keeps China's leaders awake at night, and what are US leaders doing in response." In the report, US officials questioned whether there will come a day when violent mass protests, of which there has been an alarming increase, get out of hand.

What environmental disasters, they asked, will result from China's rapid economic growth? Will the huge income gap lead to social unrest in rural areas? And how is China to handle Taiwan's president, who is increasingly moving toward formal independence?

Let us now look at former Taipei cultural chief Lung Ying-tai's "Please Use Civilization to Convince Us: An Open Letter to Mr. Hu Jintao” dated Jan 24. According to Lung, China's Gini coefficient (a measure of income inequality, with 0 being absolutely equal income and 1 being absolute income inequality) has topped 0.4, and will soon be 0.45, which is already considered the threshold for major social unrest. In fact, a Dec 10, 2004 report by the People's Daily Online's International Finance News said that China's Gini coefficient was already close to 0.47.

All this reminds me of certain official statistics released by China, which put the number of mass protests last year at 87,000, a vast increase from the previous year's figure of 74,000. It reminds me of other reports, such as how, with the scrapping of the China Youth Daily supplement the Freezing Point, the media in China has been given the cold shoulder.

It reminds me of reports of China's major problems with water pollution, and how something like 70 percent of China's rivers and lakes are seriously polluted by industrial waste and untreated sewage.
On the surface there seems to be little connection between the issues outlined above. But in fact, they all point to one phenomenon: China's ever more serious breakdown of political, social, economic and financial order, as well as potential chaos resulting from corruption, environmental pollution and industrial safety issues.

In other words, if China continues to resist reform, the situation will become even more unstable and domestic unrest could worsen. If it does come to this, there will be serious implications for the economies of both China and Taiwan. These problems will be more serious and more complex than the issues of independence or unification, or the scrapping of the National Unification Council and National Unification Guidelines. Taiwan had better prepare itself.


Lee Yung-ming is an associate professor in the department of aerospace and systems engineering at Feng Chia University.
Related Article: