What is happening to Canada's freedom of press? 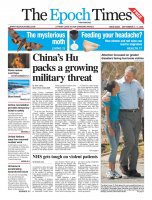 VANCOUVER (Epoch Times) 7 Feb. 2006 – Reporters from both the Chinese and English editions of the Epoch Times and Dajiyuan had their press credentials refused admission at the last minute by the British Columbia Institute of Technology's (BCIT) media relations department shortly before a delegation of Chinese officials, namely top official Chen Zhili, was to arrive for a ceremony to celebrate the school’s new Confucius Institute. Chen, who is notorious for having implemented genocidal policies to persecute Falun Gong throughout Communist China's Education system while she was Minister of Education from 1998-2003, is facing a lawsuit for crimes against humanity and her participation in the persecution.

The reporters were given no advanced notice that their names had been taken off the list. BCIT media relations manager Allison Markin explained that the cancellation of the reporters’ credentials was due to restricted access. She declined to comment on whether any other media had been removed from the media list, and added that the Epoch Times was removed because the outlet is not well known to the school.

The Epoch Times is the most widely distributed newspaper in the world, with a weekly circulation in print of roughly 1.5 million in 30 countries and 12 languages worldwide. Its Chinese edition, Dajiyuan, is the largest Chinese newspaper outside of mainland China.

The Newspaper was founded inside mainland China in 2000 as an alternative to the state-run press, which neglected to cover issues which as government corruption, the spread of SARS, democracy movements, Falun Gong, and other human rights abuses.

“We believe that the visiting Chinese delegation applied pressure on BCIT to remove the Epoch Times from its media list, stifling freedom of speech in Canada.”

The newspaper has since established itself as a leader in its coverage of China, and is particularly critical of the Chinese communist regime. It is for this reason that we suspect our names were removed from BCIT’s press list. Although Markin declined answering questions about whether the media relations department had received any pressure from the visiting Chinese delegation, from past experiences we have reason to believe that the Chinese delegation may have intervened, stifling freedom of speech on Canadian soil.
Posted by MaKina at 4:05 PM