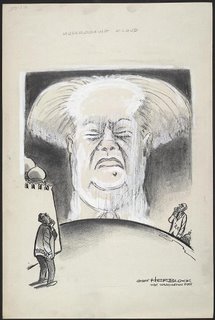 China is no longer simply the place where everything is made. Today, it is a nation poised to challenge the United States’ global leadership and radically reorder international standards if it manages to succeed. Economically, militarily and diplomatically, the Middle Kingdom that long ago turned inward upon itself is exploding outward, engaging the world with its newfound prowess. As it takes these steps, China inevitably butts up with Uncle Sam. The defunct U.S.S.R. no longer threatens Western civilization as it did when we were children. The emerging standoff features a new antagonist — a dragon instead of a bear.

As the United States remains transfixed by the global fight against Islamic terrorism, and as our nation graduates fewer math and science majors than India or China, it is time to wonder whether we missed our modern day Sputnik. We must wonder whether the significance of the Chinese spy plane incident of 2001 was overshadowed all too quickly by the events of Sept. 11, 2001. We missed our wake up call — and we did so at our own peril.

America should not hasten her own downfall with complacency in the face of a rising China. The U.S. economy grew at a rate of just less than 4 percent in 2005. In the same period, the Chinese economy grew at a rate of more than 9 percent — this coming after a decade of sizzling growth many thought impossible. The continuing Chinese military buildup financed by such economic vitality also surprised observers who had confined Chinese military aims to threatening Taiwan and bullying Japan.

The world’s most populous nation has confounded predictions on many fronts, however. Open democratic governance, long prophesied as an inevitable companion of Deng Xiaopeng’s economic reforms, has not emerged in the long shadow of Tiananmen Square. It should have by now.

Instead, the Chinese economy forges onward while political freedoms remain elusive. The Chinese Communist Party, its ideology bankrupt, resorts to fomenting radical anti-U.S. and anti-Japanese nationalism, as seen after the mistaken 1999 bombing of the Chinese embassy in Belgrade, to maintain its monopoly on political power. While distracting its populace and using economic freedoms as bread and circus, the CCP is free to crack down on spiritual organizations like Falun Gong and the Roman Catholic Church, repress knowledge (aided and abetted recently by Google) and enforce an inhumane one-child policy.

China’s regrettable actions are not restricted to the land behind the Great Wall, as seen in the nation’s foreign policy. China has been a consistent obstacle to U.N. action in the Darfur genocide, using the threat of its veto on the Security Council to defend its sizable oil and arms sales interests in Sudan. Sudan is certainly not the only rogue nation where China looks the other way with regard to human-rights abuses.

Support of pariah nations like Sudan in exchange for mineral resource wealth typifies contemporary Chinese actions abroad. China’s voracious appetite for energy resources, evidenced by a Chinese state oil company’s bid for Unocal petroleum in summer 2005, has drawn it outside and beyond its traditional sphere of influence.

In the vacuum left by U.S. disdain, Beijing built “a strategic alliance” with leftist stooge Hugo Chavez in Venezuela. It embraced dictators in Zimbabwe, Myanmar and Uzbekistan. China’s sheer economic clout, financed largely by U.S. direct foreign investment and consumer spending, is pulling nations like Australia, Bangladesh and even Chile into its orbit.

In 2004, Chinese troops landed in Haiti as part of a U.N. force — the first time Chinese military forces deployed in the western hemisphere. Chinese influence is not staying at home. The stage is being set, it seems; the battle lines are being drawn whether we like it or not. The pieces are subtly arranged on the board.

This chess game is a momentous one. China may not have a powerful carrier-based blue water navy, but its soft power — its economic weight, its cultural influence and its vast spy network in the United States (revealed in the past year by a number of defectors) — rivals America’s ability to arrange the players. It is this strategy that the Chinese employ to “put themselves beyond the possibility of defeat” without firing a shot, to quote Sun Tzu’s “The Art of War.” The question is this: given our present focus on the Middle East and our contentment with cheap Chinese goods, will we wake up? Will America recognize its possible successor for what it is or nonchalantly tip its king?

World powers wax and wane. China’s Ming Dynasty, with its massive treasure fleets, eclipsed all other powers in the world in the 1420s. Only with the rise of Mao Zedong in 1949 did the nation begin its reemergence in its quest to regain a leading role. This new cold war is not inevitable, but the United States, star of the global stage, should not content itself with a subtle demotion to understudy.

Hit the alarm, America. Peel back the sheets and rub your eyes. That’s no panda at the window. It’s a dragon.

For an extensive though not exhaustive listing of the anti-American things that China does take a look at CHINA FILE on Blogger. Just one example, China worked to remove US control of the technical management of the Internet. China opposes the US at every turn.

Communist China is after world domination and the most anti-American nation on the whole planet.

With no business ehtics whatsoever and no respect for human rights, China nonchalantly bullies her way through the economic race. Everyone wants a piece of the pie...Look again at how they treat their own people--they torture religious groups, jail journalists and lawyers, harass internet users, open fire on farmers, etc... This doesn't seem to bother the foreign investors the least bit. It's a conspiracy!

The Chinese Communist Party (CCP) is the real threat. No wonder the Chinese people are quitting the party. A party responsible for the death of at least 80 million people. It's time for everyone to wake up before the CCP implodes.