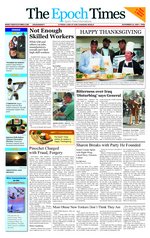 LONDON (Dow Jones) 16 Jan. 2006 -The Chinese embassy in London Monday canceled an event its ambassador was to speak at, after objecting to the presence of journalists from a newspaper critical of the Beijing government.

The event, at which ambassador Zha Peixin was due to speak, was to have been held at Reuters' headquarters in London. The audience was to have consisted of journalists and other invited guests.

In a statement, Reuters said that the meeting had been canceled after the Chinese embassy objected to the presence of two journalists from The Epoch Times, which China says is linked to the banned Falun Gong spiritual movement.

"Reuters has never kept any diplomats or journalists from attending one of these events," the company said in its statement.

The Chinese embassy is believed to have objected to The Epoch Times' critical coverage of the Chinese government's stance on human rights.

One of the journalists from The Epoch Times, John Smithies, told Dow Jones Newswires that Reuters had told him on Monday afternoon of the Chinese embassy's threat to cancel the ambassador's speech. He said that he had been put "under a lot of pressure" by Reuters not to attend the event, but had decided that it was "a question of press freedom."

A spokeswoman for Reuters said that the company had contacted the Epoch Times journalists on Monday afternoon, but had simply reiterated the concerns expressed by the Chinese embassy. The spokeswoman said Reuters had made it clear to the journalists that they wouldn't be turned away if they still wanted to attend the event.