China: Dogs can be a gourmet's best friend 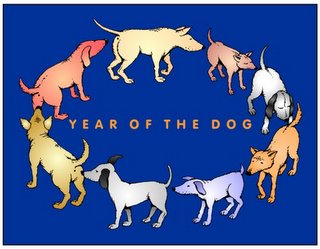 YEAR OF THE DOG

And the good news is that the Year of the Dog focuses on humanitarian issues, civil rights and much more...

HONG KONG (AFP) 27 Jan. 2006 - The Year of the Dog dawns on Sunday, but it brings mixed fortunes for man's best friend in a culture where people increasingly keep canines as pets while others condemn them to the cooking pot.

Once banned as a bourgeois luxury, pet ownership is becoming big business in China and, with one in every nine Chinese now owning a dog, they are beginning to enjoy the status pampered pooches have in some other parts of Asia.

Owners from Taipei to Tokyo spend thousands of dollars on their furry friends at grooming parlors which offer pedicures, acupuncture and massages along with a more usual coat trim.

Dogs there even have their own cafes, funeral homes and schools.

But they remain the lucky ones.

Canines are still commonly eaten as a delicacy in China and Chinese communities around Asia. Others are skinned alive for their fur to make trimming for clothing and fashion accessories.

Up to 10 million dogs are slaughtered every year in China, many killed slowly and cruelly to supposedly enhance the meat's flavor, according to Jill Robinson, founder and chief executive officer of the Hong Kong-based Animals Asia Foundation.

"People's attitudes have been changing over the past 15 years, but China is still the world's biggest consumer of dogs," Robinson said.

In northern China large dogs such as St Bernards and Tibetan Mastiffs were being cross-bred with local dogs to create fast-growing, large meat dogs that could be slaughtered as young as four months old, she said.

Even in cosmopolitan cities such as Beijing, dog restaurants remain part of the cityscape, most popular in winter as dog meat is supposed to keep you warm and tastes like beef according to those who have tried.

Skinning of live dogs for fur also takes place in China, mainly because it helps preserve the skin of the canines, according to animal activists.

Yu Fachang, an official in charge of market order at the State Administration of Industry and Commerce, this month confirmed the practice was ongoing.

"Currently, in some parts of the country, in some animal markets, animals are skinned alive, like cats and dogs. It's individual cases taking place at individual markets," he said.

"We still don't have any laws on the slaughtering of ordinary animals such as cats and dogs, as they do not belong into the category of traditional food," he said, adding that regulation was being prepared.

Rock star Paul McCartney said last November that he would never perform in China after watching a disturbing secret video of dogs and cats in a market being slaughtered for fur.

The video, from the German branch of the animal rights group PETA, shows caged dogs in wire cages being hurled from the top deck of a converted double-decker bus onto a concrete pavement at a market in southern China.