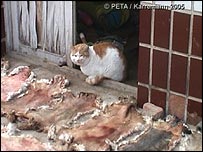 
BBC Six O'clock News: 28 Nov. 2005 - Sir Paul McCartney has vowed never to perform in China after seeing horrific undercover footage of dogs and cats being killed for their fur.

The former Beatle also said he would boycott the 2008 Beijing Olympics after viewing the footage taken in a fur market in Guangzhou, southern China.

The film shows animals being thrown from a bus, and into boiling water.

A Chinese official said boycotts were not justified, and blamed US and European consumers for buying the fur.

In the film, dogs and cats packed by the dozen into wire cages little bigger than lobster pots are pictured being thrown from the top deck of a converted bus onto concrete pavements.

The screaming animals, many with their paws now smashed from the fall, are then lifted out with long metal tongs and thrown over a seven foot fence.

They are then killed and skinned for their fur.

Animal welfare group Peta believes many of them are still alive as their skins are peeled away.

Sir Paul, and his wife Heather, looked aghast and close to tears as they watched the footage for a special report for the BBC's Six O'clock News to be screened on Monday.

They urged people not to buy Chinese goods.

"It's like something out of the dark ages. And they seem to get a kick out it. They're just sick, sick people.

"I wouldn't even dream of going over there to play, in the same way I wouldn't go to a country that supported apartheid. This is just disgusting. It's just against every rule of humanity. I couldn't go there."

In another piece of the harrowing footage, shot this summer by an undercover investigator connected to the People for the Ethical treatment of Animals (Peta) campaign group, cats are seen squirming inside a sack which is then thrown into a vat of steaming water.

They are boiled to death and skinned by a fleecing machine similar to a launderette tumble drier.

Some of the 28-minute footage is too gruesome to be broadcast.

Campaigners estimate that over two million dogs and cats are killed for their fur in China every year. China also farms animals such as mink for their fur and makes over half of the world's fur products.

McCartney added: "How can the host nation of the Olympics be seen allowing animals to be treated in this terrible way?"

Heather McCartney, herself a vociferous animal rights campaigner added: "I've seen so much footage where these poor creatures are clearly alive when they're skinned. And for what? For fashion? It's sick.

"People in every other country in the world should now boycott Chinese goods."

"If they want to consider themselves a civilized nation," said Sir Paul, "they're going to have to stop this."

A spokesman for the Chinese Ambassador in London told the BBC: "Though cats and dogs are not endangered, we do not encourage the ill treatment of cats and dogs.

"But, anyway, the fur trade mostly feeds markets in the US and Europe. Most of this fur is not for the Chinese market. So the Americans and Europeans should accept the blame.

"We have no plans to clamp down on this internally that I am aware of - it is for the US and Europeans to take their own action. They should boycott fur as a fashion material.

"I do not agree with Mr McCartney and his wife's point of view - a boycott of Chinese goods and the Olympics is simply not justifiable."

It is not currently illegal to trade in dog and cat fur in the UK and most of Europe.

But the UK government sees any legislation as being a European issue - as once the fur enters Europe from China, free trade and the difficulty of identifying the fur makes it almost impossible to police.

A DTI spokesman told the BBC: "The government shares the ethical abhorrence felt by many. That is why it banned by statute fur farming in the UK in 2000.

"Action is best taken at the EU level as a harmonised approach throughout the EU would have greater impact and avoid obstacles to the operation of the single market."

There is little evidence, as yet, of the fur products being sold in the UK. Campaigners insist they are available up and down the country, but it is impossible to tell the difference from other fur without the aid of expensive genetic tests.

The British Fur Trade Association, which represents the booming fur industry in the UK, insists that its members do not knowingly use dog and cat fur and have introduced a fur labelling system to try to guard against its use.

"As an industry, we are against any form of animal cruelty," said a spokeswoman.

"We deplore and work against the mistreatment of animals. For this reason, we also actively support and encourage the adoption of Western fur farming practices on Chinese fur farms."

"This is a ruse by campaigners to attack the legitimate fur trade. Nobody has ever found a large amount of cat and dog fur in the UK.

"The European fur industry would never use it. Why bother, when there are lovely skins from properly farmed animals?"

Euro MP Struan Stevenson has an array of cat and dog products in his Brussels office - including a coat made from Alsatian skin, a pelt made from four golden retrievers and a blanket made from around 70 cats. All were bought in Europe.

"It's cheaper to make these things from cat and dog than it is to make synthetic fur," he told the BBC.

"It really is time for this trade to be banned and the EU border to be sealed against it. And the new trade commissioner is more than sympathetic."

Markos Kyprianou, EU Commissioner for Health and Consumer Protection, is responsible for this area of EU law.

His spokesman, Phillip Todd, told the BBC: "As a human being, the commissioner abhors this trade and is very supportive of there being a ban. There are, however, legal obstacles which would need to be addressed before a ban could be put in place."

My friend was walking in a restaurant alley in China where she spotted a bin full of cats and dogs' heads...the rest was probably in the soup! Picture this if you can...just awful!

They are just sick humans.
China should not have the olympics. They skin poor animals alive
it is cruel and sick

I have seen them skin those poor animals. It is just cruel and I just want to go there and save the animals.

I admit all this is pretty bad and they treat humans even worse than animals...Did you know that they harvest the organs of Falun Gong practitioners and cremate the bodies after taking out all the vital organs to be sold on the black market to the highest bidder. Now that's really evil! There are many posts on this blog about this...just click on Between Heaven and Earth to get to the home page and take a look.

I agree the Games should be relocated to a country with some kind of dignity to keep up with the Olympic spirit. Rewarding dictators with honours is a dangerous game to play which has already backfired--their human rights record is getting worse and worse. With the persecution of Falun Gong that has gone on relentlessly for 7 years, it is clear that they have never met the standard. They should have never been given the Games in the first place and should be made accountable for their crimes against humanity.