“Who's hiding the details of the Canada-China trade deal?” 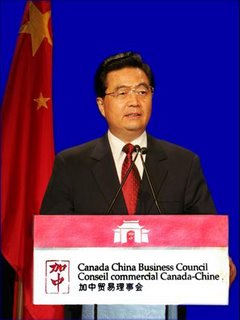 “WHO’S HIDING THE DETAILS OF THE CANADA-CHINA TRADE DEAL?”

Is Canada Being Duped by Wolves in Roots Clothing?

“It’s disturbing that International Trade Canada, the department that negotiates Canada’s economic agreements, deserves some credit for dampening public interest in one of the most important deals of the next quarter century: the China-Canada trade agreement.”

“Sometimes it’s hard to believe that this country fought an election over free trade.

Don’t get me wrong. It’s not that trade and globalization don’t warrant being turned over in the unforgiving light of a national campaign. Rather, what I find so hard to believe is that such a weighty matter as trade with the United States managed to find itself front and centre in the campaign of 1988.

Contrast, if you will, the radio silence which has characterized Canada’s current economic negotiations with China. In the midst of one of the longest campaigns in recent memory, one searches in vain for even the faintest sign that we are well advanced in negotiating a Foreign Investment Protection Agreement (FIPA) with China.

Yet, if one takes even a small portion of the “China Rising” hype at face value, then an international pact which would set the ground rules for Canadian investment into China (and vice versa) should be one of the most important deals of the next quarter century.

So it’s puzzling that the Canada –China negotiations garner so little public notice.

And if you ask trade mandarins for specifics of the negotiations with China, they tell you that such details are confidential. Canadians are likely to get their first look at the China agreement only after it has been approved by Cabinet and passed into law.

Clearly, government policy has regressed since then-Trade Minister Pierre Pettigrew proudly boasted in 2001 that Canada had fought to ensure that periodic negotiating drafts of the proposed Free Trade Area of the Americas would be released as the negotiations progressed.

A mere four years later, the best information that one can get on our negotiations with China is a suggestion from International Trade Canada that you look at the FIPA negotiating template which the Department adopted in 2004.

Trying to run through such circular logic provides one with a passable cardio-vascular work-out, but it provides no real clarity.

As a result, many questions come to mind.

A FIPA could hand Chinese businesses a right to detour around Canadian courts and to launch commercial lawsuits against Canada before international tribunals.

Is this necessary? Is it appropriate? What do Canadians think?

Similarly, is it appropriate to abet Canadian businesses in leapfrogging over dysfunctional Chinese courts, rather than pushing for fixes to those courts so that they provided a better quality of justice for locals and foreigners alike?

On a different note, a Canada-China FIPA would give Chinese investors equal treatment to local businesses when it comes to setting up shop here in Canada or in making corporate takeovers. The key question is: which economic sectors will be covered? Energy? Water? Mining?

It would be nice if the negotiations were transparent enough to answer such basic questions.

Also, given the abject state of human rights and labour rights in China, one wonders whether an investment agreement will have anything more than platitudes to offer on the subject of corporate responsibility?

And, finally, given that FIPAs provide protection for Canadian investors venturing overseas, are there any litmus tests for what constitutes a “Canadian” investor? Is there proof, for example, that the resources and political energy expended to protect intrepid Canadians operating overseas truly generates economic returns for Canada?

Or do those same firms that sport the Canadian team colours in order to qualify for protection under these treaties, dress in Bermudian pastels each year at tax time?

It may seem churlish to ask, but one recalls Enron’s classic gaming of the U.S. diplomatic and trade policy apparatus. Quite apart from their financial chicanery, Enron proved adept at using U.S. citizenship to grease the wheels of commerce in foreign lands. Yet, come tax time, the firm was found to be paying tribute not to the US Treasury, but to certain Caribbean tax havens.

Closer to home, Madelaine Drohan, writing in The Walrus magazine has highlighted how global mining companies proudly fly the Maple Leaf when it is convenient – but not necessarily when Revenue Canada comes calling.

It would be reassuring to know that when the Canadian Government stands on guard for the interests of Canadian business, that it is not being duped by wolves in Roots clothing.

Before International Trade Canada proceeds further in its negotiations with China, these are just a few of the many questions that might be trotted out for a good public airing. Indeed, what better time to do so than during a national election?”

“Ottawa-based writer and analyst Luke Eric Peterson writes a bi-weekly column for Embassy. He has advised several Canadian non-governmental organizations on the potential implications of a Canada-China investment protection agreement.”

The real threat is China all right, and it's time the world woke up to it. The gang of dictators in Beijing has way too much power right now because of trade. Western governments are panting to get a big bite of the Chinese market and think nothing of compromising their ideals in the process. China was even granted the honour of hosting the 2008 olympics without anyone demanding that they clean up their act first. It was a really bad move because it helps legitimise the communist regime and makes it look respectable. It's just like how Hitler was given the olympics in the 'forties or whenever that was. Here we are making the same mistakes over again--doing business and making friends with a dictator who cares nothing for human life and is a threat to the rest of the world. I wonder how bad it'll have to get before western politicians start imposing some HEAVY DUTY trade sanctions? Another Tiananman? Invasion of Taiwan? Or will they keep their heads in the sand until it's too late....

They sure don't seem to be in a hurry to do the right thing. If Canada gets too cozy with the Dragon she will have to pay the price sooner or later -- instant karma!