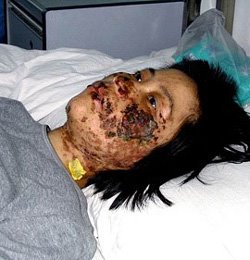 Communist China Still Number One for Torture
by M.Makina

China pretended to be on its best behaviour when UN envoy Nowak put their Lao Gai under scrutiny last week. It seems that once more communist China will get nothing but a slap on the wrist for conducting inhumane torture on her citizens. China who was among the first States to ratify the UN Convention against Torture (CAT) in 1988 has not lived up to this convention. On the contrary, Communist China has hidden behind the convention to commit worst crimes--the inhumane treatment of religious groups, spying on dissidents, imprisoning rights lawyers, to name a few. During his visit apparently Nowak was too busy to investigate Falun Gong cases, the biggest group subjected to the highest ratio of torture, rape and other obscenities--filling half the labour camps in all 30 provinces. But Nowak inspected the 'nicest' jails in Beijing and came back saying that torture, although widespread in China, had decreased. Is the UN kowtowing to Beijing? One thing is for sure--the UN Convention against Torture (CAT) is a carte blanche to keep torture alive and well in China!

PHOTO: This is Gao RongRong's photo taken 10 days after her disfiguration. She was shocked with electric batons for six to seven hours. For more evidence on the persecution of Falun Gong in China visit: http://www.faluninfo.net/
Posted by MaKina at 3:53 PM