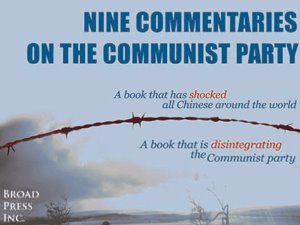 
Just the other day I was listening to a Political Counsellor from the Canadian Embassy in Beijing giving a talk at the University of Victoria (Canada) on Engaging China on human rights: opportunites and challenges. After a while it was clear that the atmosphere was set for the mixed audience to think of China as the long lost promised land with the main concern being the preservation of stability. What stability? In my opinion and that of China watchers, that country has been greatly unstable for the last 56 years under the rulership of the Communist Party. With six million people quitting the Party and growing the Red Wall is on the verge of collapse. It's no wonder that people don't want to be associated with it once given a chance to unbury their own history through reading the Nine Commentaries on the Communist Party. A Party that has killed about 80 million people through various campaigns of genocide. I must admit that I wasn’t surprised that there was no mention of the 'CCP being the main cause of unstability' in her talk. Maybe she's not aware of their history of self-destruction and that Mao Zedong, the worst killer of all times, is still worshipped by the populace. That's telling. By all means the theme of our talk should have been: Why and how do we engage with China, a fascist state, and a Party that thrives on terror, massacre, tyranny, famine, lies and wars? or Let's talk about the new China and the Nine Commentaries on the Communist Party.

What's the buzz in China these days? Every day about 20,000 people quit this evil Party. People post their notices on the Democracy Wall, public notice boards and everywhere they can including a reliable Epoch Times website. This steady wave of resignation is significant enough to keep the Beijing dictators awake at night. Their worst fear is coming true...the Party is collapsing bit by bit. Time for the Chinese people to claim their freedom from the red evil dragon.
Posted by MaKina at 3:46 PM