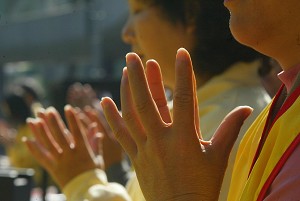 Zhang Mengye , who escaped from China to Thailand last month after being tortured in a detention camp, is currently visiting Taiwan.

"In this free country [Taiwan], I appeal to my old classmate [Hu Jintao] to make the right decision for his administration by respecting Chinese people's right and religious beliefs and to stop destroying the morals of the people," Zhang said.

Zhang and his wife Luo Muluan applied for refugee status after arriving in Thailand and have recently been granted political asylum.

Before being arrested and sentenced to two years in a forced labor camp, Zhang was a former senior lecturer at Guangdong Provincial Electric Power School.

"My wife and I were arrested unexpectedly in January 2000 while asking police officers stationed near Tiananmen Square to deliver a letter to the Chinese Communist Party pleading for the rights of Falun Gong practitioners," he said.

Zhang said that while in detention he was once handcuffed to a tree for three consecutive days in an agonizing position in which he could neither squat nor stand.

Zhang was re-arrested in May 2002 and sent to a brainwashing center in Guangzhou City, where he said he was tied up and dunked head-first into a dirty toilet bowl, causing him to swallow the foul water.

He also brought a charge against Tsinghua University, where he and Hu had studied together, saying that it cooperated with the Chinese government to stamp out the Falun Gong.