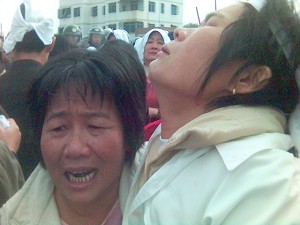 17 Dec. 2005 - There’s no rush to bring democracy to China, right? The country is booming. People are getting richer by the year. Individual freedom is on the rise, even if political freedom is not. So why rock the boat?

For the answer, read today’s paper for correspondent Geoffrey York’s vivid account of a violent confrontation in the fishing village town of Dongzhou. According to townspeople, riot police opened fire on a crowd protesting against the seizure of their land for a power plant. Beijing admits that three people were killed; townspeople say the toll may have been as high as 20.

Though more violent than most, the protest was hardly unusual. There were an astonishing 74,000 protests and other “mass incidents” in China last year, up from 8,700 in 1993. They are becoming larger, more intense and more violent. The boat is rocking quite a bit already, it seems.

People take to the streets because they have no other way to express their grievances. Voting in new leaders is not an option. China’s Communist Party (CCP) has a monopoly on power. Other forms of democratic expression, such as complaining to the press or joining a lobby group, are also severely restricted. So frustrations build up and boil over. When the state overreacts, as it invariably does when it lacks democratic legitimacy and fears its own citizens, anger grows.

So much for the argument that China’s leaders could buy the quiescence of the masses by delivering steady economic growth. China’s economic miracle has lifted as many as 300 million people out of poverty and made the lives of most Chinese immeasurably better. It has also unleashed dizzying changes and produced sharp inequities. Many “mass incidents” break out when rich developers or powerful government officials try to seize land for new housing or highways. Others erupt because new factories are poisoning the water or the air.

To avoid a similar fate, China needs to give its people a democratic release valve. Other Asian countries that moved deliberately from authoritarianism to democracy – Taiwan, South Korea, Thailand – have become both freer and more stable. China still sees freedom and stability as clashing values: if you have the first, you won’t have the second. In fact, political freedom is the key to lasting stability. People who have a say in selecting their leaders are far less likely to turn on them. If Beijing wants to stop mass incidents like Dongzhou's from turning into something much bigger, it must give its people an alternative to massing in the street.