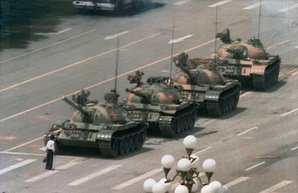 
Dec.10, 2005 - The theme for today's commemoration of the UN's adoption of the Universal Declaration of Human Rights in 1948 as announced by the UN High Commissioner, is "terrorists and torturers”. I think China fits the bill perfectly being the world’s largest rogue state that highly favours terrorism. Under the rulership of the Communist Party (CCP) for the last 56 years, China has been through a series of genocidal campaigns to present-day persecution of Falun Gong, resulting in the unnatural death of 80 million of her own people. Mass killings, torture, man-made disasters, famine, tyranny, to name a few, have become a way of life for China’s dictators for too long. Picture this for a moment…wouldn’t it be ridiculous if the Nazi Party was still in power today, but the CCP has killed even more than Hitler, and yet continues its reign of terror with impunity.

Fortunately there is currently a growing movement to establish democracy in China. As of late over six million people have quit the Communist Party, which was triggered by the Nine Commentaries on the Communist Party launched several months ago by the Epoch Times. The Commentaries give a factual account of the uncensored history of the Party and can be read online by using DynaWeb to bypass the CCP internet blockade.

To date the worlds nations and the media have not shown support nor recognized the effort for a free China--it’s no wonder that Chinese people are harassed and even detained for being caught with a copy of the Commentaries. Sadly enough democracies around the world and the UN have opted to support the dictatorship instead by focusing more on trade issues rather than protecting good old human rights. Again the oppressed people of China have to suffer for our ignorance in their yearning to follow the path of nature, the call for freedom. Harry Wu once said: “You cannot understand what it means to have freedom unless you have lost it.”

On Human Rights Day please show your support for these brave men and women who are putting their lives on the line for the sake of a higher goal. Let’s hold communist China accountable for their acts of terrorism by writing to the UN.