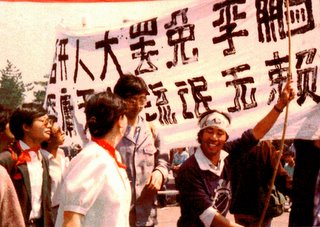 Reuters: Dec. 29, 2005 - A military doctor who exposed China's SARS cover-up has been barred from visiting the United States, in keeping with curbs imposed after he asked for a re-appraisal of the 1989 Tiananmen protests, sources said.

Jiang Yanyong's request to quit the People's Liberation Army was also refused, apparently to allow the military to continue to rein him in, two sources familiar with his plight said Wednesday. "They won't let him leave the country or retire," said one source who met Jiang recently, requesting anonymity.

Jiang's wife, Hua Zhongwei, left in July to visit their daughter in California but the 74-year-old semi-retired surgeon was unable to join them. Contacted by Reuters, he declined to comment on whether he wanted to quit the military. His employer, the No301 Hospital, refused to comment.

Jiang became a hero to many Chinese for exposing the SARS cover-up in 2003 that led to the sacking of the health minister and the Beijing mayor and prompted accurate reporting of the epidemic.

A second source said Jiang has been told that military officers holding his rank and higher cannot quit. The No301 Hospital sat on his application to visit the United States, the source said.

"They want to contain his influence ... and erase him from public memory," the source added.

Jiang was freed from months of house arrest in March this year but 10 restrictions were placed on him, including curbs on speaking without permission to Chinese and foreign reporters, traveling overseas and attending activities at the invitation of foreign groups or individuals. "The authorities are worried once he is outside the country none of the restrictions would apply," the second source said.

The military took Jiang into custody last year after he wrote a letter to top leaders seeking a re-appraisal of the Tiananmen Square pro-democracy protests which were crushed by the army on June 4, 1989. He was allowed to go home after seven weeks, during which he was forced to undergo "study sessions," but his movements were restricted for a further eight months.

Jiang's daughter accepted the Ramon Magsaysay Award for public service, Asia's equivalent of the Nobel Prize, on his behalf in Manila last year because he was not allowed to travel abroad.

Analysts say a revision of the official verdict that the 1989 student-led protests were counter-revolutionary or subversive is unlikely in the near future. Hundreds were killed.

Zhao Ziyang, who was toppled as Communist Party chief for opposing the crackdown, died in January after more than 15 years under house arrest.
Posted by MaKina at 11:47 AM