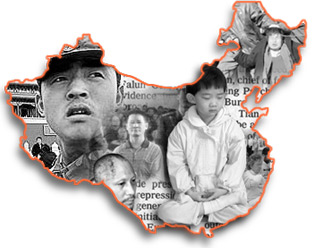 By Lu Qingshuang and Tong Xin

Epoch Times: 24 Dec. 2005 - The third open letter and statement of withdrawal from the Chinese Communist Party (CCP) written by mainland China's renowned human rights attorney Gao Zhisheng have shaken the world since they were made public. The Editor-in-Chief of Modern China Studies Dr. Cheng Xiaonong said that the sexual torture revealed in the letter shocked him and made him indignant. He believes that the CCP's persecution exceeds that of the Nazis' and that the object of this unprecedented persecution in human history is to destroy Falun Gong practitioners' bodies and souls. He admires Falun Gong practitioners for not escaping persecution by committing suicide. Cheng feels that people gain inner strength from the belief in Falun Gong. The CCP has made these police inhuman, and the world should have a fresh understanding of the nature of the Chinese Communist regime.

Cheng Xiaonong, a Ph.D. in Sociology at Princeton University, stated that by law, no government, under any conditions in any case, has any rights to justify torturing a person until either his mind is transformed or he dies. To forcibly transform a person's thoughts is against China's current laws. The persecutors use the term "to transform" as an excuse outside the law. However, this excuse can never change the fact that it is against internationally recognized human rights laws and principles, and China's existing laws.

Dr. Cheng expressed his willingness to extend his respects to Attorney Gao. He said, "Today, in China, the most terrifying thing to the Chinese people is that the CCP can persecute a person just because he or she holds Falun Gong's belief. This is completely beyond the scope of ordinary criminal and civil lawsuit procedure. First, it arrests Falun Gong practitioners for no reason whatsoever and then illegally administers a vicious persecution. Under such circumstances, speaking for or defending Falun Gong may lead to being severely persecuted. Therefore, it is really admirable that Attorney Gao had the courage to do so."

The Objective is to Destroy Falun Gong Practitioners' Bodies and Souls

Dr. Cheng said that there were many large-scale persecutions of ordinary members of society in human history. The most severe organized persecution was the Nazi Holocaust. However, the CCP's extremely vile persecution of Falun Gong, including sexual torture, is even worse than the Nazis' and is human society's most vile conduct. According to Gao's open letter, such torture against people have never happened in contemporary Chinese history. Methods of persecution against the "Five Black Categories [1]" during the Cultural Revolution was not even so severe as the persecution of Falun Gong, including some sort of sexual defilement.

Doctor Cheng pointed out emphatically, "It is especially hateful that these thugs not only torture Falun Gong practitioners to cause physical pain, but also to humiliate them. Their object is not personal humiliation, but to try hard to destroy practitioners' bodies and souls, and even to cause mental collapse. This is because any woman with slight human dignity or some sense of shame could hardly live on after this much torture, and this is just the CCP and its evildoers' objective."

Falun Gong practitioners live on with indomitable courage instead of choosing death while they have been cruelly tortured. Dr. Cheng says he "admires this very, very much." He said, "If someone wants to escape such kind of torture, he can easily choose death. In Chinese history, there were so many political offenders who could not endure torture and thus committed suicide. But these Falun Gong practitioners, excluding those who were tortured to death, all managed to survive and are making every effort to let the rest of the world know about the truth of the persecution they have encountered, and understand the evil [Chinese Communist] system. It is thus clear that the strength of belief is powerful. Why could not such ferocious and vicious persecution change their belief? This belief actually enables people to gain inner strength."

Dr. Cheng said that those who are now persecuting Falun Gong are young people of about thirty who were born after the Cultural Revolution and not influenced by it. However, these people also turned just as bad, vile, and vicious as persecutors during that time. Why can this political system cause a person to become so bad, even worse than the red guards of the Cultural Revolution who mercilessly beat people labeled as "Five Black Categories?" If this system continues to breed such people, then to what degree will this society be poisoned?

According to the CCP's current laws, the behavior of those people who persecute Falun Gong practitioners, especially females practitioners, must be sentenced even according to any communist party's law, regardless if they are policemen or not. Dr. Cheng believes that there is an obvious reason why these people dare commit such atrocities. This is because no matter how wicked they act, they do not have to worry about violating criminal laws. What organization authorized legal immunity to their wicked deeds? From which organization did this command come from and why was it ordered? Since these crimes have legal immunity and receive the authorities' encouragement and protection, it clearly shows that such criminal behaviors must be the responsibility of the country and government. When a political power encourages and protects this kind criminal behavior, its nature has undergone a change.

The World Should Have a Fresh Understanding of The CCP

In conclusion, Dr. Cheng summarized, "The Nazis persecuted the Jews, Khmer Rouge persecuted Cambodians, Stalin's regime of the Soviet Union persecuted political offenders. These are the most atrocious behaviors of these ruling cliques in human history and in general are the fascist act against mankind. However, if we look at the CCP's persecution of Falun Gong practitioners, especially female practitioners, the degree of persecution has far exceeded the previously mentioned records. There are currently no suitable expressions among human languages that can describe this government's scoundrel nature, organized crimes and fascist integration. The world should have a fresh understanding of the nature of the Chinese Communist regime.

Read more about Gao Zhisheng:
Celebrated Chinese Lawyer Quits Chinese Communist Party
Ph. D. from Chinese Academy of Science Expresses Support for Gao Zhisheng
International Advocates for Justice Issue Support for Gao Zhisheng
They Say I'm a Fake—They Are Just Afraid
Gao Zhisheng's Law Firm Faces Permanent Closure
Why One of China's Top Attorneys Broke with the Communist Party
Gao Zhisheng Sends Another Open Letter Protesting Unjust Treatment
"My Only Regret Is I Did Too Little Too Late"
A Lawyer Struggles for Human Rights - Even His Own
Persecution against Falun Gong Must End, Says Lawyer