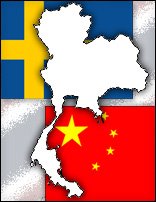 Communist China is threatening and pressuring governments to side with her illegal and immoral human rights abuses against Falun Gong
by M.Makina

A group of Falun Gong supporters who were meditating outside the Chinese consulate in Bangkok on Human Rights Day were blatantly attacked by the Thai Police who apparently were under direct orders from the Chinese consulate. The practitioners who were peacefully protesting the rapes committed by the police during the UN envoy's visit to Beijing, were searched, had their banners taken away and were arrested the next day. Five detained practitioners are presently on a hunger strike to protest their unlawful arrest. Similar incidents happened this week in Argentina and the Chech Republic while CCP top officials were visiting those countries.
Falun Gong supporters are protesting in front of Thai Consulates and Embassies around the world to condemn this injustice and to request all governments to not succumb to pressure from the Communist regime.

It is not the first time that Thailand has served communist China. For instance, Pirjo Svensson who was visiting Thailand from Sweden in April 2003 was detained for 37 days for no reason other that she is Falun Gong. She was kept in an overcrowded cell where she suffered abuses. Fearful of mass appeals later that year, the Thai government issued a blacklist to prevent Falun Gong from entering the country prior to an Apec summit. At that time the Thai Prime Minister told human rights groups that demonstrations would tarnish the kingdom’s reputation.

Thailand is an independent, democratic country strongly rooted in religion and freedom of belief. This demonstrates that Thailand has not shown support for universal principles of morality and human rights, and shows the world that the nation does not live up to the name ‘Land of the Free’. Buddhist Thailand has yet to learn to say no to Beijing.

The persecution of Falun Gong headed by the CCP, in its 6th year, is genocidal in nature and implemented through torture, defamation, and brainwashing that has been denounced by the media, governments, and human rights organizations worldwide. Concurrently Amnesty International has documented the use of a Massive Propaganda Campaign headed by China's dictators used to turn public opinion against the peaceful practice.
Posted by MaKina at 9:45 PM