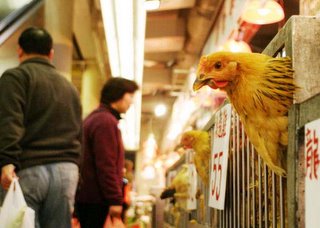 It was reported last week that a Hong Kong scientist who has been monitoring the situation asserts that China has the bird-flu virus "in every corner of the country"! It is a shame that the communist regime hasn't bothered to inform the international community about that inconsequential 'little' fact. According to media reports about 3,000 people have been infected and it is suspected that more than 300 have died from this flu. How many more lives can be spared--especially now that the labs have been ordered to shut down because they fail to meet state regulations or is it because the truth is being revealed to the outside world?

The sad reality is that the Chinese Communist Party (CCP) lies as easily as the rest of us breathe. Deception is the name of their game, and if we in the West don't wake up to this soon and hold them accountable we're likely going to regret it in more ways than one. For instance, China's human rights record is abysmal, they support rogue regimes like North Korea and Zimbabwe, they've allowed the pollution to deteriorate to the point that it's affecting neighbouring countries, they've threatened war on Taiwan and they conduct unfair trade practices--to name just a few of their multitude of sins.


Yet we've invited them into the fold of the West with open arms--even granted them the honour of hosting the 2008 Olympics--without demanding anything in return. Orwellian insanity springs to mind.


The Bush administration may leave much to be desired, but if communist China ends up as the world's next superpower, which many predict it will, then we're going to be in big trouble.
Posted by MaKina at 10:55 AM