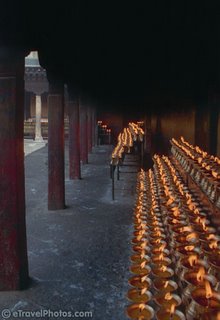 AFP: 07 Jan. 2006 - Exiled Tibetan spiritual leader, the Dalai Lama, has said Tibetans in his homeland are still suffering from "repression forces" in a swipe at China, in a newspaper report.

"The Tibetans living in Tibet are less fortunate than their counterparts living in India as they have to suffer a lot in their motherland from repression forces," the Asian Age quoted the Buddhist leader as saying.

The newspaper said while the Dalai Lama did not mention China by name, it was clear his remarks were aimed at Beijing.

The newspaper added that the Dalai Lama said Tibet's future would depend on the initiative of people living in Tibet.

He was speaking in Amaravathi, a small village in southern India, where thousands of Buddhists have gathered for a 12-day special teaching session from their spiritual leader.

The Dalai Lama fled to India in 1959 after an abortive uprising against Beijing's rule, nine years after Chinese forces entered Tibet. He set up a government-in-exile in the northern hill town of Dharamsala and has never returned to Tibet.

The Dalai Lama's harsher tone comes amid reports of mounting opposition among younger Tibetans to his peaceful drive for Tibetan autonomy within China.

Tibetan leaders in exile have expressed concern that tensions could spill over after the 70-year-old leader's death as younger Tibetans become impatient with Buddhist pacifist ideals.

When the Dalai Lama asked at the spiritual camp how many devotees had come from Tibet, scores raised their hands.

"Probably there could be one loss in every family of yours as a result of occupation of Tibet," he said, the newspaper reported.

The Tibetan government-in-exile has estimated at least one million Tibetans have died under Chinese rule and around 80,000 refugees have fled the country.

The Dalai Lama, who received the Nobel Peace prize for his peaceful opposition to Chinese rule, has long abandoned calls for Tibetan independence.

Instead, he has said he believes the way forward for Tibetans is to remain within China while hoping Beijing upholds Tibet's culture under a form of autonomy dubbed the "middle way."

But Beijing regards him as the face of Tibetan separatism and a traitor.

The Dalai Lama was speaking at a special camp where he was tutoring followers in the Buddhist tantric practice of Kalachakra or Wheels of Time Empowerment that finally leads to "enlightenment."

The Dalai Lama dedicated the Kalachakra 2006 to world peace and to those suffering in Tibet, the Asian Age said.
Posted by MaKina at 12:11 AM