Ditching the dictators: "Breaking the real axis of evil" 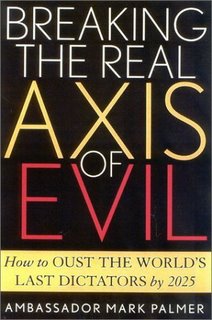 "Dictatorship itself should be recognised as a crime against humanity and we should gather the evidence against each one of the last, least wanted."
Ambassador Mark Palmer


This comprehensive guide on how to ditch dictators gracefully is truly a gift that needs to resurface periodically as a kind reminder that an important part of humanity is waiting to exhale!

Epoch Times: 23 Sept. 2003 - Ambassador Mark Palmer introduced his new book, “Breaking the Real Axis of Evil—How to Oust the World’s Last Dictators by 2025.” The book is a “how-to” guide on bringing democracy to the world without the use of violence.

Driving out the world’s last dictators has been the latest focus of his work. Palmer, speaking to an audience said, that currently the most important dictatorship is China, since it is home to 60% of the world’s people but they do not live in the air of freedom.

Including Jiang Zemin of China, Saddam Hussein of Iraq and Kim Jong-Il of North Korea, there are currently 42 dictators in the world. Eight of them live in Asia, in countries such as China, North Korea, Vietnam, Laos, Myanmar and Bhutan. In the Middle East, Northern Africa and Western Asia, there are 23 dictatorships. Eleven dictatorships exist in Southern Africa, and three in Europe and the Americas, including Belarus, Cuba and Haiti. He believes that for reasons of both security and social justice, America and other democratic countries should bring about an end to the world’s remaining dictatorships.

Palmer designed a worldwide coalition that unites international political and military forces, democratic countries, human rights and democracy activists, various NGOs and individuals to open up countries that are currently closed to the world. He believes that the dictatorships of China, North Korea and other countries can be a threat to the entire world, while a democratic China will benefit the world tremendously. It is thus critical to inform the world’s people of the importance of a democratic China. Palmer said he read the “Tiananmen Papers” and realized its significance. He thought in 1989, China was not farther away from democracy than the Eastern European countries or the former USSR at that time. If it weren’t because of the one person at the top, democracy in China could have succeeded. But if it were possible in 1989, it should still be possible today. That’s why he has been actively supporting and participating in the demonstrations of Falun Gong [against the persecution of its practitioners in China].

Palmer believes although Falun Gong does not have any political agenda, the persistence of the movement will awaken in people, especially the younger generation, the concept of human rights and democracy. This might in turn influence the thinking of the Chinese leadership. Palmer considers it important to set a goal and an implementation schedule. He thinks that global democracy is achievable in 2025. For China, his goal is even more ambitious: democracy in year 2015.

Palmer thinks that people from all backgrounds should exert influences on the dictators themselves. Experts in academia and the diplomatic circles should help the dictators realize that they can’t hide behind the system and culture of a dictatorship forever; they must take responsibility for what they have done. Palmer used an example of an executive from a large petroleum company, who knows almost all the dictators and was even a personal friend of Lenin’s. The executive illustrated to Palmer that the dictators’ world was like a pyramid. When they climb up, they only fear the one person above them. But once they reach the top, they become fearful of everyone below, including their family and friends.

Palmer believes dictators such as Jiang Zemin are exactly like that. Even though they are despicable as a person, it is still important to have a dialog with them. They have fears and desires as well. When Palmer was interacting with the last dictator in Hungary, the dictator trusted Palmer even more than the people around him. Palmer believes that leaders of Western democracies should be in close contact with Hu Jintao, China’s new chairman, and discuss with him the true nature and full meaning of democracy, which goes much beyond elections. They should also tell Hu that all the people of China, all the people of the world, hope that he can return democracy and freedom to China and are willing to cooperate with him. However, it is imperative that there be a timeline and a strategic plan.