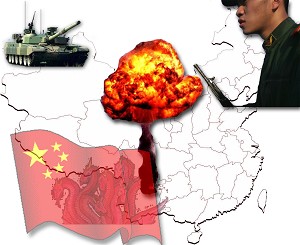 Ethan Gutmann, author of Losing the New China, gave the following address at a rally in Zion Square, Jerusalem, November 10 and 11, 2005

Epoch Times, 22 Nov. 2005 - Thank you. It's a special privilege for me to speak to you today, here in Zion Square, here in Jerusalem, my hometown of many years ago.

As Israelis, you have heard about the New China, or perhaps many of you have seen it: the glittering business opportunities, the towering hotels. Indeed Deng Xiao Ping's old joke – How many people are there in Israel? Six million? Which hotel are they staying at? - is now reality.

And they have heard about you too: the book "Secrets of Jewish Businessmen" was a Beijing bestseller. In many places in the world, people would read such a title to convince themselves that there was a global conspiracy. But in China people read it because they think it will help them to get rich.

And indeed when it comes to China, getting rich, or pretending too, is exactly what we have all been about as well. And building the New China was supposed to be good for America, and good for Israel.

But - as the rep for the Israeli Company iCognito put it to me in a Beijing Starbucks when I mentioned the word "democracy": "First you have to put some money in people's pockets." So we have been doing just that for many years now.

In fact, thanks to Cisco's "Policenet," Falun Gong practitioners, democracy advocates, Christians and Tibetans have been hunted down, tortured, and slaughtered. And the brochure shows a fourth thing: a tank, because Cisco can help China win its wars. So let's ask a question: are Cisco's operations in China good for America?

Now Cisco is not alone. A Chinese journalist, Shi Tao, has been sentenced to ten years. Thanks to Yahoo.

Chinese citizens think they can access the same news that we do, but they are only seeing what the CCP wants them to see. Thanks to Google. The word "democracy" is officially an obscenity for Chinese bloggers. Thanks to Microsoft's Bill Gates – the guy on the cover of "Secrets of Jewish Businessmen".

The Chinese have encryption and advanced battle-tracking capabilities. Thanks to Motorola.

And China is increasingly ready to use that tank. Thanks to Israeli defense companies.

Now when I bring this up with some of my Israeli friends they rightfully point to Loral and Hughes and other areas of American failure to control arms exports. I don't mind them bringing it up. But the failure to control our investment does not justify your failure.

Now some say that these sales were good for Israel. The argument has been made that Israel's weapons sales are part and parcel of having an advanced research and development base. And I agree: that is good for Israel. In fact, I wish Taiwan had adopted a similar strategy. But there are many markets in the world.

And although the Chinese don't create many weapons they are good at copying weapons systems from places like Russia and Israel. And there are many markets. And the Chinese like to sell weapons. So let's ask some questions:

When China supplied mortars, rockets, and ammunition to Al Qaeda in the Tora Bora caves, was it good for Israel?

When China supplied air-defense specialists and decoys to Saddam Hussein was it good for Israel?

When China supplied components for Iran's nuclear weapons program, was it good for Israel?

When a leading Chinese defense contractor supplied a new form of plastic explosive, more lethal, and easier to smuggle than semtex, to terrorists – plastic explosives that ultimately were used by suicide bombers in a Tel Aviv club, was it good for Israel?

The Chinese prime directive in the Middle East – maybe in the world – is simply this: Oil for the lamps of China. So let's ask the question: are the Chinese are willing to depend on the free market in oil? Or does their current strategy – to buy every pipeline, every asset from Unocal to Central Asia – assume a very different world, one where oil is sold – or not sold - under the barrel of a gun? Is that Chinese vision of the world good for Israel?

And if Taiwan falls, because America does not have the will to defend it, and because the UN and Brussels sneered at it while it existed, is that good for Israel?

Or is it a blueprint for Israel's fall as well?

We – Americans and Israelis - have been investing in the New China on faith – faith that money will change the CCP, and faith that the tank will never be used. But what are the current trends? What kind of new China did we get in return?

An Internet without freedom. Nationalism without moral content. An opening of historical wounds without the desire to heal them. Territorial claims without end. And the scapegoating and murder of Falun Gong without apologies, without shame.

Our failure to recognize this trend for what it is – creeping fascism – does not justify yours. Not at all. Not for the people who came out of the Diaspora – out of the Holocaust. This history, this tragic sensibility, this special moral sense - this is the real secret of the Jewish businessman. And yes, it is good for Israel.

And that means that your place is with us, with Taiwan, with the Nine Commentaries (on the Communist Party), with the defectors from the CCP. Your place is with the Chinese Diaspora, not just of location, but of mind-a place of values, democracy and faith. Thank you.