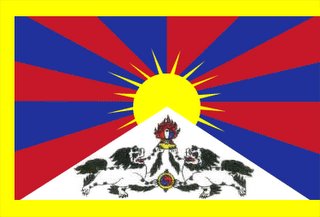 AFP 15 January 2006 - A passport issued to a Tibetan official before Chinese forces occupied the region in 1950 has been found in Nepal and provides proof of Tibet's former independence, a Tibetan exile group has said.

The passport was issued by the Tibetan government in 1947, Tenzin Tsundue, general secretary of the Friends of Tibet group, said in a statement.

He told AFP the group knew of no other Tibetan passport that had survived.

The passport -- a large sheet of traditional Tibetan paper -- was given to then Tibetan Finance Secretary Tsepong Wangchuk Dedhen Shakabpa, who was leading a trade delegation to China, the United States and Britain, it said.

"This document stands as an important proof of the independent status of Tibet, legally recognised by other countries before China's invasion of Tibet," he said.

Tsundue said the document had visas issued by a slew of nations such as the United Sates, Britain, India, France, Italy, Switzerland and Egypt.

The passport contains in the centre the Tibetan government seal surrounded by seals of different governments that issued visas to the official, he said.

China says its occupation of Tibet liberated it from feudal oppression.

Beijing formally established a Tibetan Autonomous Region in 1965 but the Dalai Lama complains there is no genuine autonomy and has been waging a peaceful campaign to press China to provide greater rights to Tibetans.

The passport had been given by Shakabpa to an Indian friend in 1992 and ended up with an antique dealer in Kathmandu, said Tsundue. It was not known how it found its way into the antique dealer's hands.

It was bought back for 10,000 dollars using money borrowed from a Tibetan monastery in 2004.

Tsundue said some 850 Tibetans -- living in exile in India and Nepal -- contributed donations to repay the monastery. After the target was met, "we decided to inform the people of the recovery of the passport," he said.

The group plans to include the passport in an exhibition "Story of a Nation: Independent, Occupied and Exiled Tibet," in India this year aimed at proving Tibet's former independent status, Tsundue said.

While the Dalai Lama has dropped a call for Tibetan independence, Tsundue said that objects showing it once was independent would "add more weight" to the spiritual leader's push for greater autonomy for the region.

Articles that will be on display include "postage stamps of independent Tibet, Tibetan currency -- notes and silver coins -- (and) old photographs of the Tibetan army," taken in the 1920s, Tsundue said.