Buddhist master to be mummified 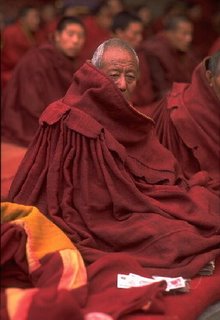 Buddhist master to be mummified
By Baldev Chauhan

Shimla, BBC: 09 Jan. 2006 - Buddhist monks in the northern Indian state of Himachal Pradesh have decided to preserve the body of their master so he can be worshipped forever.

Disciples of Yogi Amtrin, who died on 1 July last year aged 84, plan to mummify his body, breaking with tradition.

Tibetan Buddhists oppose preserving the dead, but his followers want to continue to be able to pay respects.

Yogi Amtrin, who belonged to the minority Drupka Kargu sect, came to India from Tibet nearly 45 years ago.

He spent years teaching yoga and meditation at the Khampagar monastery at Tashijong in the Kangra valley - 260km (160 miles) away from the state capital, Shimla.

Khampagar is considered to be the oldest Tibetan Buddhist monastery in India.

Since his death, the monk's body has been placed in a wooden box in a lotus sitting posture as if he is meditating.

"Yes we are preserving the body of Yogi Amtrin. Currently the body lies in a wooden box packed with salt which is changed every two months," said Nawang Negi, a senior monk at the monastery.

Salt removes the moisture from the body, preventing decay. Disciples say the mummification process will take a year.

"We cannot tell the exact time when the body will be ready.

"After it is completely dry it will be finally placed in a glass chamber so that all his followers can pay their reverence to the great master as they did when he was alive," Nawang Negi said.

Asked if the Indian authorities might object, Mr Negi said there were already three such preserved bodies in Himachal Pradesh, including one in Dharamsala.

Apart from Tibetans, Amtrin had many foreigners among his followers.

The monastery is about 50km from Dharamsala, the seat of the Tibetan government-in-exile led by spiritual leader the Dalai Lama.

In 1959, the first wave of Tibetan refugees fled to India from Tibet with the Dalai lama after the Chinese occupation.

In 1959, the first wave of Tibetan refugees fled to India from Tibet with the Dalai Lama after the Chinese occupation.