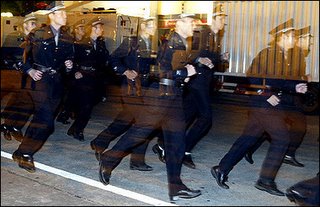 AFP 16 Jan. 2006 - Scores of protesters were injured and at least one person was feared dead as hundreds of police in southern China used electric batons and tear gas to quell a land protest, locals said.

Up to 20,000 people from several villages in Guangdong province's Sanjiao township near Zhongshan city gathered on a highway just after dusk on Saturday to continue protests that had begun earlier in the week, locals said.

Protests turned violent Saturday night when up to 2,000 policemen began indiscriminately attacking up to 20,000 demonstrators and onlookers who had blocked a major highway with their protest, Tan and other villagers said.

He said between 5,000 and 6,000 villagers again confronted several thousand police on the highway on Sunday night, although no clashes erupted.

"Between 30 to 50 people were injured as police were attacking anyone they saw," one villager named Tan, told AFP. "There is a lot of talk that a 13-year- old middle school girl student was killed in the attack."

Officials answering phones at the Sanjiao township government and police stations on Sunday refused to comment on the incident.

"You need to contact the Zhongshan government, so far we cannot say anything," an officer at the Sanjiao police station said.

Officials from Zhongshan government, which administers the region, were unavailable for comment.

Tan said villagers had begun demonstrations in the evening to avoid police cameras that earlier in the week had been recording the protests.

Another villager confirmed the Saturday night clash, but refused to discuss it in detail, fearing the government would retaliate by arresting him.

"I am afraid I will be arrested if I discuss this," the man said, adding that local officials had imposed a news blackout.

Villagers were demanding compensation for land taken to build a local road leading to the highway, as well as the acquisition of 200 hectares for a Hong Kong developer, Tan said.

"We oppose the government's use of force and tear gas in quelling the protests. We call on the authorities to begin talks with farmers to reach a negotiated settlement," Guo Feixiong, a legal aid officer and activist who has helped farmers in other land disputes.

"We also oppose the methods of the protesters. They should not block roads but should protest in a peaceful and lawful manner."

Guo spent nearly three months in jail, before his release last month, for his role in organizing peasant protests in Taishi village, not far from the Sanjiao protests. Taishi residents were trying to remove their village head whom they accused of illegally selling village land.

The case was seen as a test of the government's resolve to uphold laws on village democracy and curb rampant requisition of land by local officials. But the dispute turned violent in August and September when police roughed up and detained scores of villagers and activists.

Although the case against Guo was dismissed for a lack of evidence, the efforts by Taishi villagers to remove the village head were quelled.

As China's economy continues to race ahead, violent clashes over land requisitions have become increasingly common as a result of local officials' frequent collusion with property developers.

In the past few months alone, Guangdong province has witnessed several major cases of unrest. As many as 30 protesters were shot dead by police in a confrontation in Dongzhou village last month, according to residents there.

The government claims only three were killed, but acknowledged that police opened fired at the protests. Farmers who have their lands confiscated for little or no compensation often have little recourse and their frustrations boil over into violent clashes with the authorities.