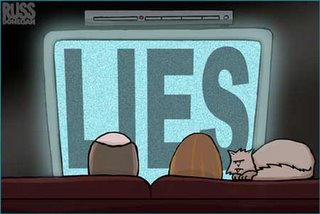 Beijing wants to beam government-controlled TV broadcasts into Canada by Daphne Bramham
Vancouver Sun: 20 Jan. 2006 - The Chinese government wants to beam its propaganda into Canada on nine digital channels. All nine -- seven Mandarin channels, some of which would have limited English-language news programming, one Fujianese and one Cantonese – would be operated by China International Television Corporation, which is controlled by the government.

Carefully packaged with soap operas, dramas, sitcoms and fashion shows, the Chinese government wants its message to be allowed unedited into Canada.

Some of the people who wrote to the Canadian Radio-television and Telecommunications Commission before last Monday's deadline for public comment urged it to approve the application because they simply want to watch familiar programs from home. Others said it would encourage Canada-China trade.

Among the powerful backers of the application are the traditionally pro-China, Chinese Benevolent Association of Vancouver, which claims to have 85 member organizations representing 50,000 people, and the National Congress of Chinese Canadians, which claims to represent 280 Chinese-Canadian organizations, including the Vancouver benevolent association and to speak for more than 300,000 people.

The NCCC is closely allied with the Liberal government. In November, it agreed to a $12.5-million package aimed at redressing the harm done by the head tax and a nearly 30-year ban on Chinese immigration. But because that package did not include an apology or individual compensation, both the NCCC and the Liberals have been under attack by head-tax payers and their descendants.

In a letter to the CRTC written in French, NCCC's Quebec region co-chairman Jack Lee says the nine channels are needed to better serve Canadian society, of which the Chinese make up an important part.

Yet Lee and the NCCC opposed New Tang Dynasty Television's successful application last year for a cable licence for a Chinese-language station.

"According to our knowledge this group is involved with the Falun Gong group," said the letter written by executive co-chairman Pin Tang and signed by the nine regional co-chairmen.

"The television will become a political propaganda tool for a small group of anti-China activists and will create conflict in the Chinese-Canadian community. This is not for the well-being of the Canadian public. Therefore we are strongly opposed to granting a licence."

It's hard to see from how anything could be more divisive in the Chinese diaspora than the long arm of China reaching into Canada.

That division is certainly reflected by the 290 public responses to the CRTC.

Philip Lau wrote simply but eloquently in his adopted language. "All these 9 channels are [the] tongue of [the] Chinese communist party. They are evils who are never telling the truth."

But at least some of the opposing letters resulted from a call to action from the Falun Gong, a spiritual movement that has been banned by China.

Falun Gong official Lucy Zhou's letter to the CRTC pointing out that China television broadcast programs celebrating the 9/11 terrorist attack on the United States and failed to report on the SARS epidemic is echoed by others.

Yung Quon Yu of the Chinese Benevolent Association of Vancouver argued in his letter that "additional Chinese-language programming will help promote and preserve Chinese culture as part of Canada's diverse multicultural landscape.

But modern mainland Chinese culture is what is approved by the Communist party, which during the Cultural Revolution destroyed priceless art and ancient artifacts, banned music and imprisoned intellectuals.

Its popular culture is heavily circumscribed. The Internet is censored -- as much as any government can censor it.

In December, security police arrested online journalist Yang Tianshui without a warrant. Accused of "divulging state secrets", he has not been heard from since.

Just this week, three Chinese journalists were given prison sentences ranging from one to 10 years for reporting on clashes in Lishui last May involving peasants who were protesting confiscation of their land. They had been charged with "illegal commercial activity, fraud and extortion."

For all of us who value free speech, a free press and freedom of expression, how can we argue for banning any information, even if it is propaganda?

There are parallels between this application and that of al-Jazeera, the infamous Arabic-language network. When the CRTC finally approved its application in 2003, it made the distributors responsible for monitoring and editing out any inappropriate programs or statements that might contravene Canada's hate laws.

In the case of Chinese television, the problem is different. It is not so much what China's government-controlled television reports, it's what it does not report that is the problem. And there's no easy fix for that.

But here's a thought:

A couple of the China TV supporters told the CRTC that approval would be good for trade relations. So, let's tell the Chinese government that we'll take their channels, if CTV, CBC and Global can operate unfettered in China. We'll even translate them.
Posted by MaKina at 1:22 PM