Asians miss out on human rights 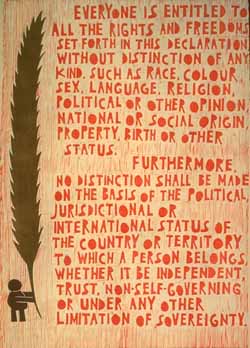 Asians miss out on human rights

Hong Kong (BBC) 17 Jan. 2006 - People in Asia are being denied their human rights because of an absence of the rule of law in much of the continent, a new report has said.

The Asian Human Rights Commission, a Hong Kong-based non-governmental group, says enormous efforts have been made to raise awareness of human rights.

But much less work goes into making sure that they are actually protected.

Most Asian countries have adopted the UN conventions and charters promoting human rights and outlawing abuses.

But the Asian Human Rights Commission argues they are not widely adhered to.

The efforts to protect human rights compare very poorly with the hard work that has been undertaken to create an awareness of those rights.

Burma, Nepal and Cambodia are countries that have no way of enforcing the rights of their peoples, the commission's report says.

While democratic and human rights jargon is used in these states, their citizens cannot approach the authorities with even a most rudimentary confidence and belief that the state will respect their rights.

India is criticised for the delays in its justice system and its police force's prejudice against minorities.

The lack of the rule of law in much of China, the commission says, is also a problem.

Many other Asian countries are attacked for not doing enough to prevent torture.

Singapore is singled out for creating a society where it is in effect impossible, the report says, for people to enjoy individual rights enjoyed elsewhere on the continent, such as freedom of expression or assembly.

In Singapore, it says, the capacity to assert one's rights simply does not exist at all.