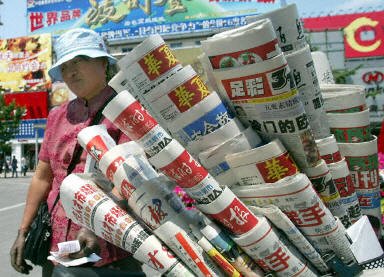 AFP 18 Jan. 2006 - Two journalists in eastern China were sentenced to up to 10 years in jail for publishing an unauthorized magazine that exposed local land disputes, a court official said.

Zhu Wangxiang and Wu Zheng were convicted by the Liandu district court in Lishui city, Zhejiang province, on Tuesday for publishing the "New China Youth" magazine without having the approval of media authorities, a court official told AFP.

"Formal charges against the two men included illegal business operations, fraud and extortion," said the official, who declined to be named.

Zhu and Wu were also convicted of raising two million yuan (240,000 dollars) in investment funds for the magazine, which was deemed illegal fund raising since the magazine was not registered, the official said.

"A total of seven people were tried, three were convicted and sentenced to 10, six and one years respectively, and the four others were released."

Zhu received the 10-year sentence and Wu was jailed for six years, while the identity and crimes of the third person who was sentenced to one year were unclear.

According to the Beijing Times, Zhu had registered the "New China Youth Joint Company Ltd" in Hong Kong in August 2002, but it was not registered in mainland China.

A Xinhua news agency report said last month the action against the magazine, was taken largely because of two articles that focused on land right disputes, an issue that has become one of the biggest causes of civil unrest in China.

The articles were entitled: "Appeal of the Peasants," and: "When Power Replaces Law, What Happens to the Law? Return Our Human Rights."

The articles came amid much tension in Lishui city after clashes between local farmers and police erupted violently in May last year. The farmers had been protesting the seizure of their land without adequate compensation.

"When local villagers saw these articles, they volunteered to give the magazine 30,000 yuan. This constituted bribe-taking so they were charged with fraud," the court official told AFP.

"These journalists also threatened the local government. They said if the government did not resolve the peasants' legitimate demands, then they would write up the stories. This constituted extortion."

China's ruling Communist Party maintains elaborate controls over the media, even though the state constitution specifically calls for freedom of the press.

The latest jailings of journalists are not the first in China, nor was it the first time that a media publication has gotten into trouble for publicizing land disputes.

In March 2004, the former editor of the outspoken Southern Daily, Cheng Yizhong, was arrested on charges of embezzlement, but was released a few months later after courts threw out the case.

His newspaper also highlighted the plight of a young intellectual who was beaten to death by police after being jailed for not carrying his identification papers.

Last month, top editors of the popular Beijing News were sacked over a series of sensitive reports, including a story on the fatal beating of six villagers in Dingzhou, Hebei province, by thugs hired by local authorities.

The dispute centered around a controversial power plant which authorities wanted to build and villagers opposed.

Land requisitioning by the authorities has become a serious social problem in China with many of the 74,000 protests officially recorded in 2004 linked to such disputes.