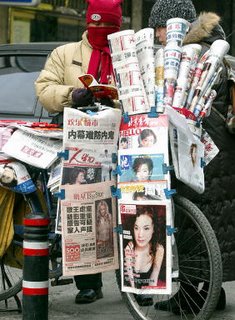 The Communist Party's propaganda department on Tuesday ordered the closure of Bingdian Weekly, an insert in the party-affiliated China Youth Daily newspaper. Bingdian editor Li Datong yesterday cited as the reason for the closure an article challenging the government's official history of a nationalist uprising of 1900 known as the Boxer Rebellion.

Bingdian's closure is the latest sign of Beijing's anxiety over news media that are increasingly driven by market forces and a burgeoning sense of professionalism rather than official propaganda directives.

Authorities have jailed several Chinese journalists in the past two years and moved to tone down feistier publications. Late last month, officials removed three top editors of a popular tabloid, the Beijing News, known for its aggressive reporting on sensitive issues. Reporters at the newspaper staged a temporary work stoppage in protest.

Since Mr. Li founded Bingdian in 1995, it has built a reputation for investigative journalism and liberal political commentary. Mr. Li's efforts to push the boundaries of official tolerance were especially noteworthy because his paper is controlled by the China Youth League, an influential arm of the Communist Party that was once headed by Hu Jintao, now China's president.

Bingdian was among a handful of Chinese publications to report on a violent clash in June involving hundreds of farmers resisting the use of their land to build a power plant. The weekly also ran political commentaries that subtly challenged official stances. In October, it published a lengthy interview with a South Korean scholar who argued that Korean soap operas -- wildly popular in China -- are superior to those produced in China because they are a product of Korea's democratic culture.

Mr. Li has won public battles with censors and conservative editors in the past. In August he posted an open letter on the Internet blasting China Youth Daily's editor in chief over a planned incentive system that would have rewarded reporters whose stories were praised by government officials. The plan was later scrapped.

Mr. Li has said in past interviews that he was able to push the envelope in large part because of growing competitive pressure on China's news media. The government in recent years has cut official subsidies to publications and reduced the number of mandatory subscriptions for government agencies, forcing media organizations to compete for readership.

China Youth Daily's circulation has fallen to about 800,000 from a peak of three million in the 1980s. Reader surveys consistently rated Bingdian as its most-popular feature.

The essay that triggered the closure, written by a Chinese professor, argued that official textbooks inaccurately depict the Boxer Rebellion, a nationalist uprising in which thousands of Chinese Christians and hundreds of foreigners were killed. The essay, published earlier this month, alleged that Chinese history books carried only material that cast China in a favorable light, "no matter whether true or false."

The propaganda department's closure order said the essay was inaccurate and had, among other offenses, "seriously hurt the national feelings of the Chinese people," Mr. Li said.

An official at the propaganda department declined to comment. A person who answered the phone in the office of China Youth Daily's editor in chief, Li Erliang, declined to make him available for comment.

Bingdian's Mr. Li yesterday remained defiant. "They want us to admit that we were wrong," he said in a telephone interview. "We aren't wrong. They are."

Lung Ying-tai, an influential essayist with a wide audience in Taiwan, Hong Kong and the mainland, said the shutdown of China Youth Daily's weekly Bing Dian supplement crushed the last hopes of many Taiwanese that Hu would allow a more open society.

"People once thought that as a figure of the new era, your mindset and vision would be deeper and more open than your predecessors," Lung wrote in a half-page commentary Thursday in Taiwan's China Times newspaper.

But the incident this week revealed Hu had allowed officials to monitor and suppress the educated elite "with whips and rulers," wrote Lung, whose popular column on culture is carried in many newspapers on the mainland.

"There are many Taiwanese who still deeply love, and love unconditionally, the land of China, and how would you discuss reunification with them without being cursed or sneered at?" she asked.

Taiwan and China split amid civil war in 1949, but political tensions linger. Most Taiwanese don't want to unify with the mainland, fearing the move would force them to lose their freedoms and economic prosperity.

However, travel and trade have thrived between the communist mainland and self-rule, democratic Taiwan, and China's recent economic clout has attracted many Taiwanese to work or study on the mainland.

Bing Dian, or Freezing Cold, was among Chinese media outlets that have been publishing the limits of official tolerance in part to capture greater market share.