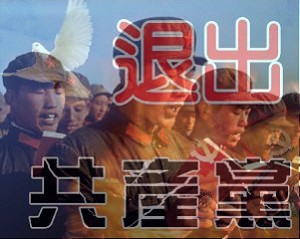 Best viewed in Mozilla
"The Communist Party... It's Over."Forum on Nine Commentaries
by Dr. Jack Wheelers

The Nine Commentaries shockwave is still brewing as 7 million Chinese have quit the CCP so far.

Epoch Times, 08 May 2005 - In his speech at the forum on the “Nine Commentaries on the Communist Party” at the National Press Club on April 19, 2005, Dr. Jack Wheeler said, “The Communist Party has lost the mandate of heaven. And it’s over.” Dr. Wheeler is the President of the Freedom Research Foundation and the publisher and Editor-in-Chief of To the Point.

Dr. Wheeler said, “Ambassador Palmer mentioned these democracy movements that worked in Serbia, in Ukraine, in Turkestan, etc. The one in Serbia was based on a slogan that actually caused Milosevic to step down: “He’s finished. He’s finished.” You get a slogan like that, it’s over. It’s done.”

The Wall Street Journal called Dr. Wheeler "the originator of the Reagan Doctrine." The Washington Post called him "the Indiana Jones of the Right." Izvestiya, the organ of the Soviet Communist Party, called him an "ideological gangster." "Dr. Jack" predicted the collapse of the former Soviet Union ten years before it came about and explained exactly how it would take place. He won a bet with a top expert when the Berlin Wall fell.

Laos, and Afghanistan, and to democracy movements in Eastern Europe and the Soviet Union. He became an unofficial liaison between them and the Reagan White House. Based on his experiences with anti-Soviet insurgents, he developed the strategy for dismantling the Soviet Empire that was adopted by the White House and became known as the "Reagan Doctrine." It worked.

The following is the speech Dr. Wheeler delivered at the forum on the “Nine Commentaries on the Communist Party”:

I'd like to read to you a letter delivered by diplomatic courier last week. It was addressed to His Excellency Wen Jiabao, Premier, State Council, People's Republic of China, Beijing

It is understandable that many Chinese remain angry at the crimes committed by Japanese soldiers in China prior to and during World War II. It is further understandable that their anger would be inflamed by a textbook refusing to acknowledge this history.

It is, however, not useful to attempt to instill in Japanese today a sense of guilt over actions committed not by them but by their forefathers, not by their democratic government but by a militaristic regime of the past. The Japanese feel quite strongly that the generation who committed crimes against humanity paid for them in full at Hiroshima and Nagasaki.

Further, since the end of the war, Japan has enjoyed a democratic government instead of suffering under a totalitarian dictatorship. Japanese have had freedom for almost six decades: freedom to assemble, freedom of the press, freedom of speech, and all other freedoms taken for granted in normal modern democracies.

I, along with many of my fellow Japanese citizens, must admit to being astounded at your admonishing us to "take responsibility for history," and to engage in "deep and profound reflection" on our history. Astounded because you pretend not to see how much this advice applies to you and the Communist Party of China.

There is an old English proverb of which I am sure you are aware: People who live in glass houses should never throw stones. The government of the People's Republic of China is such a glass house. There is a book published in England which is one of the most widely read on earth: The Guinness Book of World Records. Under the heading of Crime: Mass Killings, the founder of your government is listed as the greatest mass murderer in the history of humanity. The man whose picture adorns your currency and remains enshrined in a mausoleum in Tiananmen Square, Mao Zedong, oversaw the deaths of 26.3 million Chinese- not foreigners but his and your fellow citizens- between 1949 and 1965.

To put this in perspective, The Guinness Book of Records [reports] that Adolf Hitler's Endlosung or "Final Solution," what history knows as the Holocaust, killed 5.8 million Jews between April 1941 and May 1945. Mao killed four times as many Chinese as Hitler killed Jews. The German people have repudiated this monstrous history. It is time for you to repudiate yours.

But of course you can't. Because the same regime which committed these atrocities in China is the same regime ruling China today. To take responsibility for your history would mean your government- and you personally—- would have to relinquish power, and let the Chinese people be free to judge what you have perpetrated upon them.

For this is not confined to atrocities of the past, but the dictatorship of the present. To this day, China has no democratic freedoms. As you are reading this, thousands of political prisoners who did no more than ask for these freedoms are languishing unjustly in the Laogai concentration camps of the Chinese Gulag.

Premier Wen, history does not stand still. It is moving, and moving in the direction of democracy. From Iraq to Georgia to Ukraine to Kyrgyzstan, people are choosing democracy over dictatorship. The time fast approaches when the people of China will make the same choice.

On the very day your government orchestrated violent protests assaulting my government's embassy in Beijing, 60,000 people rioted in the town of Huaxi in Zhejiang Province of southwestern China. Their violence was directed at your government, destroying police cars and beating up officials, because their lives are being ruined by the pollution of 13 government-owned chemical factories nearby. There are hundreds- hundreds-of riots, disturbances, and public protests against your government taking place in China every day now. Your grip on power cannot last much longer.

I understand that you see the solution is to redirect the people's anger towards a "foreign devil" such as us and away from you. This effort will fail because Japan lives in the future of democracy and freedom, and we want China to do so as well. We want for the Chinese people what you deny them: living in a free future, instead of a totalitarian past.

Mr. Koizumi will, of course, deny he ever sent such a letter. But that isn't important. What is important is that this letter be read, via the Internet, fax, email, mass-reprints, and covert distribution to millions of folks in mainland China. Such a letter needs to be read throughout China just as are the “Nine Commentaries” of The Epoch Times.

What is the Next Step to Further the Impact of “The Nine Commentaries”?

The “Commentaries,” by telling Chinese the truth about their government and exposing its perfidy, is having a considerable impact in diminishing respect for the PRC Communist regime among its subjects. The question I would like to address is: How can we build on this impact? What is the next step to best further the impact of the “Nine Commentaries”?

Now, defense is obviously very important. The United States is constructing a defensive alliance against China with Japan, then South Korea, the Philippines, Vietnam, and India. The Indian Navy will play an increasingly important role. The US Navy will have a naval base in Vietnam's Cam Ranh Bay within a few years, at which Indian naval ships will be welcome. A crucial objective is to deny China's claim to the South China Sea as its territorial waters.

But defense is not enough. As a Congressman told me on the Asia Subcommittee, the US will defend Taiwan from attack, but will not retaliate- no US Marines on China's beaches.

Foreign Companies and Investors May Be Pouring Money into China

So, what are China's vulnerabilities? First are the Three No's- no water, no wives, and no banks, which make for a very precarious economy and society. Most immediately critical is the last: All four of China's main banks (all state owned) have more un-collectable debts than they have assets. The Shanghai Composite, China's largest stock market, has fallen from 1600 to 1200, or 25%, in the last 12 months.

The second great vulnerability is the explosive disparity between the 50-100 million middle class and the 800-1 billion impoverished. The New York Times reports (12/31/04) that there were over 60,000 sixty thousand- riots, disturbances, and public protests throughout China in 2004. "People can see how corrupt the government is while they barely have enough to eat," a demonstration leader was quoted. "Our society has a short fuse, just waiting for a spark."

As the protest level in China escalates dramatically to thousands of riots and demonstrations a month, and the insolvency of China's banking system becomes inescapably more obvious, the Chicoms in Beijing see no alternative to preserving their control over Chinese society other than redirecting all the riotous dissent now aimed at them towards an external enemy.

Nationalism- the Only Way to Avoid Chaos and Anarchy

They realize that, as everyone including themselves has lost their belief in Communism, their only way to avoid chaos and anarchy is through a frenzied Chinese nationalism. Yesterday it was directed at Taiwan. Today it is being directed at Japan. Tomorrow, perhaps Russia for stealing China's Maritime Provinces in 1860, which is now Russia's Far East.

The third and the ultimate vulnerability of China is democracy and the worldwide move towards and demand for it.

This is the book that needs to be translated into Chinese and made available throughout China: The Case For Democracy: The Power of Freedom to Overcome Tyranny and Terror, by Natan Sharansky.

One person who has read this book and understands its power is Frank Hsieh, the new Premier of Taiwan and current leader of Taiwan's Democratic Progressive Party. Premier Hsieh recently announced that his government would abandon the infamous "one country, two systems" hypocrisy pushed by both Beijing and the US State Department, and would advocate instead a "one country, one system" policy. That one system is democracy. For there to be unification between the two countries, China must become like Taiwan and not vice versa.

The brilliance of this is breathtaking. It means that Taiwan is at last no longer playing defense, but taking the offense against Beijing at its most vulnerable point. How can Beijing rant and saber-rattle now when the Taiwan Government says to it gently, "Let's forget about Taiwan independence. We want re-unification just like you. All that you need to do to reunify China and Taiwan is become democratic like us."

This message puts Beijing on the defensive, where it belongs. There must be an unceasing, unrelenting demand for Chinese democracy. China's lack of democracy must be the front-page issue in newspapers around the world, not Taiwan's confrontational insistence on independence, or Japanese textbooks.

The democratization of China is what can shatter the glass house (of) Chinese Communism, and rebuild in its place a nation where the Chinese people can live peacefully, prosperously, and free in the 21st century.