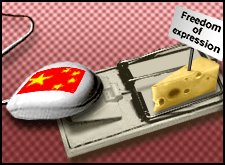 04 Jan. 2006 - A Chinese journalist imprisoned for subversion after writing articles about corruption has been freed a year early, according to a campaign group.

Jiang Weiping was reunited with his family after a court in Dalian, north-eastern China, commuted the final year of his six-year sentence.

The US-based Dui Hua Foundation said he was freed on good behaviour.

But it said it might be a good-will gesture ahead of an expected visit to the US by Chinese President Hu Jintao.

President Hu had been due to visit the US in September, but the visit was cancelled amid the aftermath of Hurricane Katrina.

"Clearly Hu Jintao is planning a trip to the US in the near future and the US government has probably made it clear that they want some kind of gestures on the human rights front," Dui Hua's research manager Joshua Rosenzweig told Reuters news agency.

His imprisonment was met with an outcry from international rights groups and many governments, including the US, had appealed for his release.

The Dui Hua Foundation says Mr. Jiang is with family members, but said it was likely he would apply for a passport in order to join his wife and daughter, who live in Canada.