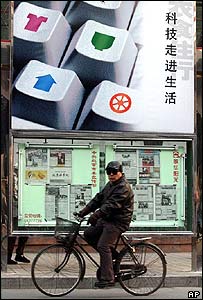 Reporters Without Borders, which tracks the activities of Western technology companies seeking to do business with repressive regimes, condemned the Google-China deal as "hypocrisy" and called it "a black day for freedom of expression in China" in a statement published on its Web site.

Mercury News (Ca.) 24 Jan. 2006 - Now is the time for Google to change its motto from the overly ambitious "Don't Be Evil'' to the more realistic "Don't Be More Evil Than Necessary".

You can't live in the real world without making compromises, as Google is now tacitly admitting by launching its first Internet search operation based in China.

To run an Internet business in China, companies local and foreign must sign an agreement to effectively censor themselves -- removing or blocking any information China's repressive government might find objectionable.

Google has now signed that agreement. The search service it will run within China won't point to Web sites of dissident groups such as Falun Gong, or sites advocating independence for Taiwan. And the service certainly won't offer reports on how Chinese police recently responded to unarmed protesters in small villages by shooting them.

There's also more than a little irony in Google announcing the move this week, after the company got headlines last week for defying U.S. government requests to hand over information about its users' online behavior. Such defiance wouldn't be tolerated for a minute in China; Google would get immediately booted out of the country.

Sergey Brin and Larry Page were idealistic young Stanford University graduate students when they started Google in 1998. Much of that idealism still survives.

In April 2004, they wrote a "founder's letter,'' included in the documents for Google's initial public stock offering, where they cited "Don't Be Evil'' as a corporate goal.

"We believe strongly that in the long term, we will be better served . . . by a company that does good things for the world even if we forgo some short-term gains,'' the pair wrote. "We aspire to make Google an institution that makes the world a better place.''

I believe Brin and Page, now both 32, have largely succeeded. Google has certainly made my life better -- I use it dozens of times every day to quickly find information that would otherwise take me hours to track down.

But I also believe the Mountain View company will tie itself in knots unnecessarily if it doesn't acknowledge the ambiguities in managing a multi-billion-dollar corporation operating all around the planet.

In other words, the lesser evil of knuckling under to China's odious censorship rules is outweighed by the greater good of providing Google to China's population of 1.3 billion.

McLaughlin further said Google will introduce other services in China, such as e-mail and blogging, "only when we are comfortable that we can do so in a way that strikes a proper balance among our commitments to satisfy users' interests, expand access to information, and respond to local conditions.''

My translation: Google doesn't want to respond to a search warrant from China's police, as Yahoo did last year, only to discover it has caused a political dissident to be packed off for a long prison sentence.

Sooner or later, though, Google will encounter a stark choice between money and morals if it keeps doing business in China. The same will be true in many other countries whose governments don't believe their citizens deserve unfettered access to information.

Only by abandoning the first blush of youthful certainty will Google be able to tiptoe through this minefield. I hope Brin and Page, who retain tight control over Google, have the wisdom to distinguish between doing the best job possible and doing only the right thing.

Here's one example of a translated result you would get from China-Google...pretty distorted from the truth!

CHINOY: Even before Google's move, Beijing had constructed what's been dubbed the Great Firewall of China, to keep sensitive information out. So this is how it works. On this computer, I've brought up Google.com and I'm going to put in the name of one of the Chinese organizations the government hates the most: The Falun Gong spiritual group. There are 4,390,000 entries. The first one is Falun Gong's own homepage. There's another that's about Falun Gong's leader, further down others that are supportive of Falun Gong -- one from religioustollerance.org.

Now I'm going to put the same name in at the Google.cn Web site that's designed just for China and see what we get. This time there are 11,000 entries, but of a very very different character. The first one, Falun Gong

I think your response to Google's move is rather rash and illogical. First of all, censorship is not necessarily immoral. Secondly, even if google did provide the URLs of dissenting opinions, the Chinese citizens still would not be able to access the pages and Google would only be putting them in danger.

Google's opinion can be rather enlighting:
http://googleblog.blogspot.com/2004/09/china-google-news-and-source-inclusion.html

On the contrary, censorship becomes highly immoral when it fails to respect the human rights of its users. It is indeed a 'black day' for freedom of expression in Communist China.

The Chinese people are used to censorship already. Its not like its something new for them OR that they don't know they are being censored or watched. Previously the Google servers were outside of China and everythin served from there was being filtered by the Government. So what the Chinese people are seeing now is no different than what they were seein earlier. The only difference now is that the user experience is a bit better since the server is housed inside of China, so the latency is less. In the end, it's a win for the Chinese internet user.

Note this is different from the US where the US government tries to snoop on people WITHOUT them know about it.

Google had a perfect opportunity to live up to the Universal Declaration of Human Rights but instead chose to kowtow to Beijing. So much for that equation and our values of Freedoom and Liberty.

Keeping the Chinese people in the dark about their past and present history is not the way to go--Google has become a facilitator of China's dictators in that respect.

Let's not forget that the main point that seems to be missed here is that "freedom of expression" suddenly has no meaning for those tycoons who do business with Communist China--how convenient for the pocket book. There is no social responsibility at stake whatsoever. Is it worth it?

It is too bad because the people of China are the ones who pay the price for this kind of selfish and regressive behaviour--they get to live in a box and punished for using the web.

It seems that in China the internet has reached the point where it is so restrictive that I wonder what the meaning of www stands for. Why do the Chinese even bother to use the internet at all--which has become a tool of the devil more than anything with jail sentences to top it off! It's crazy...they need help not more fuel to the flame.

It is a sad situation which deserves much attention from the international community.

It is becoming increasingly more difficult to do it, but we must remember and try to make change with the dollars we spend.

The best way for the rest of the world, as individuals, and not as companies and corporations to put pressure on China is to hit them where it hurts... " The Pocket Book "

Be diligent and do your research. Do not buy goods and services that are made in China. Try not to support companies and products that are made with Chinese labour.

The global consumer/investor is the fuel that keeps the Chinese machine in power. As individuals, we can make the difference in changing the powers of China. A groundswell of international boycots of all Chinese goods and services will certainly put pressure on the powers or risk loosing global market share.

QUIT blaming Google, corporations and the Chinese Government. They are all pawns. We consumers, as drops in the pond, will be the onlly ones who have the power to force change. Vote with your hard earned money. Spend the few extra bucks to not buy China. Be responsible. Look at the tags. We can do it if enough are on board. Do we have faith in ourselves to make global change hapopen for billions of people, or do we want to save a few bucks on a TV and the goods we buy at WALMART?

Stand up and be counted. Be proud of where you spend your money. Stand up to "the man". Show the young people who stood up at Tiananmen Square their casue was valid. DO IT !!... be good....

Great angle! I hope people will have the wisdom to do that...

I don't think that we should stop there--we can write an email to our representatives and remind them of China's abysmal human rights record--the persecution of religious groups, journalists, internet users and dissidents. Our elected officials can help by putting pressure on Communist China's dictators so that eventually 'trading with a conscience' would become the norm. This would have a positive effect all across the board.