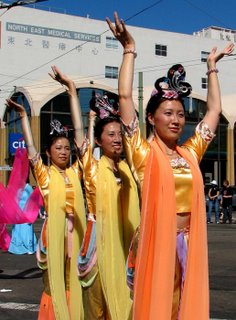 Falun Gong practitioners in San Francisco are trying to gather as many signatures as possible to allow them to participate in the Chinese New Year Parade. For the past two years practitioners have been denied the right to be part of this annual event.

In the next 48 hours, officials will review the question of discrimination and hopefully revoke the decision of the SF Chinese Chamber of Commerce besides voting on a resolution condemning the persecution of Falun Gong. This is a big endeavour! We hope that you can support this effort by signing the petition here as this will carry a great weight in the decision-making process.

Please, feel free to distribute this petition to as many people as you can subito presto! And you don’t need to be from the States to support this effort. Every signature will help to stop the interference that is unmistakenly coming from the Chinese Communist Party (CCP).

We, the undersigned (California residents or other) are appalled by the evidence of the San Francisco Chinese Chamber of Commerce's discrimination against Falun Gong practitioners.

We have learned that Falun Gong has been denied the right to participate in the most important celebration of the Chinese community – San Francisco’s Annual Chinese New Year Parade – for the past two years and are concerned that this discrimination stems from the Chinese Communist Party’s (CCP) persecution of Falun Gong extending overseas.

The wrongful persecution, torture, and murder of Falun Gong practitioners by the CCP in China has continued for 6 ½ years. Falun Gong’s bright colors, beautiful Tang dynasty dances, drum team, dragon and beautiful lotus flower float display the finest of traditional Chinese culture and arts and should not be denied participation in the parade.

We sincerely hope that the Chinese Chamber of Commerce stops discriminating against Falun Gong practitioners and immediately approves their application for admission into San Francisco’s 2006 Chinese New Year Parade. We strongly urge President Bush, and all appropriate government officials, to take action and defend freedom and human rights.