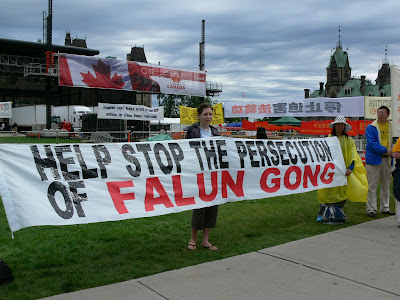 MWC / CFP: Ottawa – Prior to Foreign Minister John Baird’s trip to China, the Falun Dafa Association of Canada held a press conference today on the Hill to call on the Foreign Minister to give human rights of Falun Gong an equal footing with trade considerations during his meetings with the Chinese Communist regime officials, specially when the trip is scheduled at a time that marks the beginning of the 12-year violent repression (July 20).

At the press conference, Ms. Jing Zhi, a Falun Gong practitioner living in the riding of Mr. Baird and whose cousin recently was arrested and detained for practicing Falun Gong, made a plea on behalf of 12 Canadians to Minster Baird to help rescue their beloved ones who are languishing in the Chinese gulags for practicing and spreading truth about Falun Gong.

The “eradication” campaign against Falun Gong practitioners started in the early morning of July 20, 1999 with large scale arrest of practitioners across the nation. The persecution has evolved into “crimes against humanity” with the Chinese Communist Party’s genocidal policy against the group resulting in Falun Gong practitioners being the largest group of prisoners of conscience in the world. They number in the hundreds of thousands in any given time.

Over the past 12 years every major human rights organization in the world has reported on the persecution, torture, and death of Falun Dafa practitioners. To date, there have been over 3,427 confirmed deaths as a result of the violent crackdown by the Chinese Communist Party. Deaths by torture, malnutrition, exhaustion, neglect in detention, and even the harvesting of practitioners' vital organs in hospitals and prison camps. It is feared that the actual number of deaths may have reached into the tens of thousands.

“Instead of letting this visit be a propaganda success for the persecutors, it is the best opportunity for our Foreign Affairs Minister to make a strong and direct statement on the rights of Falun Gong practitioners at the centre of his public comments in China and to make Canada’s position strong and clear, “ said Xun Li, president of Falun Dafa Association of Canada.

“We hope Minister Baird will see through the attempt of the CCP to manipulate and deceive our government to turn its back on the terrors happening to Falun Gong practitioners in China by using lies, hate propaganda and diplomatic and economic pressure and threats of trade loss to silence voices of concern in other countries,” said Li.