Members of US Congress Rally for Falun Gong - Video 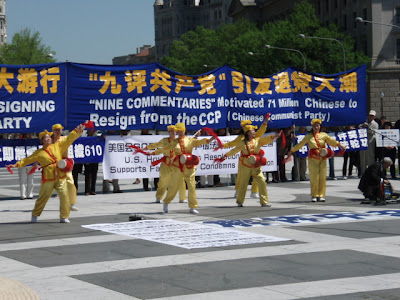 Video: The resolution is the first to be introduced in the Senate, and also the first U.S. government resolution to recognize Tuidang, a growing peaceful movement of Chinese people who are withdrawing from the Communist Party. This year’s rally, held annually, celebrates the approaching milestone of 100 million Chinese who have renounced the Communist Party since 2004.

“We, as human beings, must stand together. The good people of this world must stand together against the type of tyranny, injustice, and the human suffering that has been brought about by this dictatorial regime in China,” said Rep. Dana Rohrabacher.

“This fact is so important for the Americans to understand—that that force in the world—if you allow an evil force like that to continue without being challenged that evil force will someday affect us here,” Rohrabacher added.

More at Epoch Times
Posted by MaKina at 8:28 AM