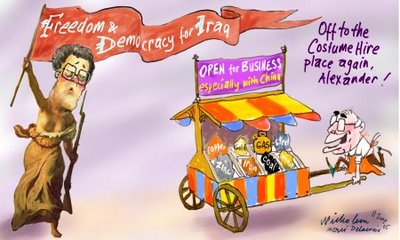 The Australian: March 30, 2006 – Chinese State Premier Wen Jiabao will visit Australia this weekend to sign an agreement for sale of Australian uranium to China. Canberra has indicated it is assured that China, a signatory of the nuclear Non-Proliferation Treaty, will not use the uranium for weapons manufacture.

While selling uranium might be in Australia's short-term economic interest, it is not in our long-term national security interest. There is a close link between uranium and nuclear weaponry development. How, on the basis of this agreement, can Australia be sure China will use its uranium for peaceful rather than military means?

However, to this day, these two treaties have not been ratified and put into operation in China. In addition, the Chinese Government has failed in its commitment to abide by the World Trade Organisation by opening up and liberalising its banking system and media organisations.

And China has shown nothing but contempt for intellectual property rights, a situation that has enraged the US. Even when it comes to matters of public health that have the capability of affecting not only China but the world, the Government in Beijing has demonstrated a propensity to stall and obfuscate.

A week passed before the Chinese Government admitted to the massive benzene spill in the Songhua River that shut down Harbin's water. The more recent toxic spill in Sichuan showed no lesson had been learned: again, a week passed before any public announcement.

Outbreaks of severe acute respiratory syndrome and then avian flu were initially denied and hidden. According to eyewitness accounts, when SARS broke out in China and the World Health Organisation brought in a team of disease experts for an inspection, SARS patients were packed into ambulances and driven around Beijing. They were only returned to the hospitals after the inspectors concluded Beijing was not under threat of SARS.

What assurance does Australia have that such tactics will not be employed to avoid detection of misuse of its uranium? What sort of inspection regime is needed to ensure the use of Australian uranium is not mismanaged?

Is China on the road to a "peaceful rise", as Communist Party leaders tell us? Its growing economy and huge domestic market dazzle the West, while its military build-up and reactionary political stance has prompted US Secretary of State Condoleezza Rice to warn of its potential as a negative force.

Historically, a newly emerging power often clashes with existing powers. In the Asia-Pacific region, the most likely zone of conflict is Taiwan, with its pro-independence leader repeatedly challenging the territorial integrity of the communist People's Republic.

Though not imminent, should such a conflict materialise and draw in the US, what would Australia do? Australia's long-standing security relationship with the US will be in conflict with its benign business relationship with China and Australia will be put to the test by both. By selling uranium to China, Australia is possibly backing the foe of an ally.

World War II was to a great extent caused by the appeasement of Nazi Germany by Britain and France. At the end of World War II, repeating Chamberlain's mistake, US president Franklin Roosevelt and British prime minister Winston Churchill signed the Yalta treaty with Stalin, in which the Soviet Union obtained an undeserved post-war position in East Asia.

With the continuation of this policy by the Truman administration, communist-led troops were given a free hand to sweep over mainland China. The US looked on without going to rescue its former wartime ally, Nationalist Chiang Kai-shek. To some extent, this incited Kim Il-sung's adventure in the Korean War for the unification of the whole peninsula. Thus took shape the Cold War of East-West confrontation, lasting 40-odd years. Today, a neo-appeasement is taking effect. In confronting the rise of China, the policies and performances of Western democracies are less than laudable. Western leaders, Australia among them, seek access to China's huge market and play down the significance of democratic principles and human rights, overlooking the suffering of the 1.3 billion people under Chinese totalitarianism.

Let us not forget China is a country where the private meetings of Christians in their homes are raided by the police; where there are reports Falun Gong practitioners are placed in barbed-wire camps and tortured; where an individual is sent to jail for seven to 10 years for doing nothing but posting internet messages about democracy.

The liberalising economic policy taking effect since the end of the 1970s has pushed China forward into an unprecedented period of high growth. Most Western observers believed political reform would inevitably follow.

Unfortunately, the present outlook for China is not positive. The injection of enormous amounts of capital has rescued the regime of the Chinese Communist Party; the high rate of economic growth has helped legitimise it and keep it in power. Have investments and other commercial activities in China impeded more urgent political reform?

During Premier Wen's visit to Australia, Prime Minister John Howard should let his counterpart witness the cut and thrust of question time in the House of Representatives to see first-hand how a democracy is supposed to work. And he should lobby Wen to make good use of his political clout to push forward the political reform agenda in China, so that China can enter the mainstream of world democracy and keep itself on the right side of history.

Chin Jin is a Chinese-born Australian citizen who is chairman of the Federation for a Democratic China (Australian division).

Group says Beijing could divert the material to atomic weapons

Open Letter to Prime Minister John Howard, all MPs and Senators of Australia