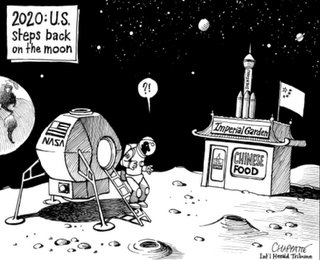 Is Communist China’s science threat for real…or is the CCP the real threat to Chinese science students? BTW Navrozov's views don't necessarily reflect my views--I refer to Jamestown Foundation often and they deserve much respect. If this is any consolation at all, apparently there is no such thing as bad press.

The Jamestown Foundation would value your participation in a brief survey concerning "China Brief" (published by the Jamestown Foundation). Reader feedback plays a crucial role in Jamestown's continuing effort to improve our publications. It also helps our writers identify those issues or topic areas that you believe merit deeper analysis.

Your insights and recommendations would be greatly appreciated, particularly with respect to qualitative questions appearing in the latter half of the survey.

Then followed eight "qualitative questions" about how I evaluate what "China Brief" says about China. I answered that I believe that the fatal danger of China is the most important issue facing the democratic West today, but the "China Brief" articles are irrelevant to this subject.

As an example, I surveyed two articles in "China Brief" of that same day, March 2.

The first of these two "China Brief" articles is "China's Revolution in Higher Education" by Yitzhak Shichor.

This can be called China's revolution in higher education, especially since the word "revolution" has been a favorite of Chinese propaganda since 1949 and the user of the word can always expect to be received well in post-1949 China, which Yitzhak Shichor visited. On the other hand, calling the dictators of China "dictators" may lead him, when he is visiting China, into the torture chambers, practicing the Chinese torture of 3,000 and 110 years ago.

In his article, Yitzhak Shichor sees only one "handicap" of "China's revolution in higher education": History is studied by only 0.5 percent of all students, and philosophy by 0.1 percent!

Indeed, why should even one student study history or philosophy, useless for the growth of military might? Propaganda should describe history to the population as a history of movement of mankind to communism, as ushered in by Marx, Lenin and Mao, while Chinese propaganda philosophers should explain that the resulting society will be the best of all possible societies.

What about other humanities? Shichor writes: "As a matter of fact, the China Statistical Yearbook does not provide any data on sociology, political science, international relations, demography, statistics or religion."

Anyone whose mental level is above the level required just for digging ditches or s sweeping courtyards can readily explain this aspect of Chinese higher education thusly: "Engineers and scientists in China are expected to finally outnumber those in the West; they are to be concentrated on military projects; and hence to ensure for the dictators of China what Hitler began to be suspected of in the democratic West in 1939 (but not earlier!) – world domination. As for sociologists and such others, the dictators do not need them."

But Shichor comes to a different conclusion: "Beijing" (that is, the dictator) is not responsible for 38.8 percent of postgraduate students studying engineering in 2004 as against 0.1 percent of students studying philosophy. Quite the contrary! Says Shichor: "Aware of this handicap, Beijing tries to promote the idea of comprehensive university. ..."

Possibly, the democratic West is doomed because its governments, legislatures, intelligence agencies, ministries of defense, universities and mainstream media are full of those whose mental level is high enough only to dig ditches or sweep courtyards – or write in 2006 about how "Beijing" promotes "the idea of comprehensive university" or in 1938 about how the German patriot Hitler was a champion of peace.

The other article (by You Ji) is "A New Era for Chinese Naval Expansion." The article seems to have been written by a Chinese admirer of the "phenomenal growth" of China's military might, namely, the People's Liberation Army Navy (PLAN). But what about its danger to the West? Surely the PLAN is not some defenses on the shores of China, but a giant global navy that may operate off the coasts of the United States and Europe!

But contrary to his hymn to the "phenomenal growth" of the PLAN, You Ji is completely reassuring: "China's technological breakthroughs are being rendered obsolete in the West. The major powers can move to a new level of development sooner than expected, making the new ships in the PLAN vulnerable in a short period of time."

This miraculous ability of the West always to overtake and outstrip China's military might implies that the West can always see how advanced China is militarily. But what about the development of SECRET weapons?

In 1945, the Japanese could be sure that their navy matched its U.S. counterpart. But the Japanese did not know that five years earlier the United States had begun to develop nuclear weapons, since Germany had been developing them. After two "atom bombs" had been dropped on Japan, the latter surrendered unconditionally because Japan did not know how many "atom bombs" the United States had.

You Ji possibly does not even know the expression "post-nuclear superweapons," and certainly the United States does not know how far the development of each such weapon has advanced. However, if there is "a new era for Chinese naval expansion" or "phenomenal growth of the Chinese navy," it has to be conjectured that the development of a certain secret weapon has entered a "new era of expansion" or has "phenomenal growth."

What is involved in this case is intelligence/espionage. The United States is a transparent society, with millions of "illegal aliens," each of whom would be qualified in China as a spy and would disappear into torture chambers. Owing to Chinese "state controlled" corporations in the United States and in China, and owing to U.S. corporations in China, the intelligence/espionage of China knows everything about the United States. Incidentally, the English language is known by many Chinese in business, professions and government. What about the CIA's knowledge of China?

In 1972, as we emigrated from Soviet Russia and came to New York, I told the CIA's analyst and his two assistants (they came to our home in New York) that the Soviet dictators were developing post- nuclear superweapons to be able to destroy or neutralize the Western means of nuclear retaliation and thus circumvent Mutual Assured Destruction. The CIA did not believe me until 1992, when Yeltsin opened to international inspection the giant biosection of the former Soviet countrywide development of post-nuclear superweapons.

China is even less known to the CIA than was Soviet Russia. While Russian is an Indo-European language, as is English, Chinese is known in the United States not much more than are the languages of ancient civilizations, and at times it seems in the United States that China does not exist as a dictatorship, but is a country very much like Germany was in 1938 in the perception of a majority of the democratic West – a benign, industrious and peaceful society.

But what if, instead, "Germany Brief" described how magnificent German higher education was, except that too many students studied engineering and science, compared with those studying humanities; while "aware of this handicap, Berlin tries to promote the idea of comprehensive university." Or "Germany Brief" would describe how phenomenal the growth of the German navy was since 1933, but the democratic West would always be able to overtake and outstrip it. In his three-page e-mail to me on March 4, one of my readers, Michael Kelly, says that China "is the most important and most ignored issue facing us today." I agree – while the two "China Brief" articles I have surveyed above contribute nothing to this critical issue of survival of the democratic West.