The CCP cheats the peasants once and again 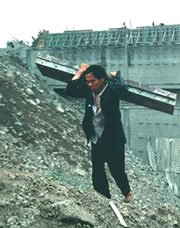 Clintonian Communism is an excellent review from WSJ on the National People’s Congress opening session. The author cuts through the glossy package and delivers nothing but the bare bones. Look here for some of my insights on this topic. It’s clear that China’s dictators make it sound like they are very concerned about the peasants and we know why that is. First let’s have a look at the Nine Commentaries on the Communist Party to see how the CCP really takes care of their peasants. It's no wonder that they are rebelling with over 84,000 riots a year.

The CCP Cheats the Peasants Once and Again

CCP relied on peasants to gain power. The rural residents in the CCP-controlled areas in the early stage of its buildup devoted all they had to the CCP. But since the CCP obtained control of the country, peasants have experienced severe discrimination.

After the CCP established the government, it set up a very unfair system – the residential registration system. The system forcefully classifies people into rural and non-rural populations, creating an unreasonable separation and opposition within the country. Peasants have no medical insurance, no unemployment welfare, no retirement pensions, and cannot take loans from banks. Peasants are the most impoverished class in China, but also the class carrying the heaviest tax burden. Peasants need to pay a mandatory provident fund, public welfare fund, administrative management fund, extra education fee, birth control fee, militia organization and training fee, country road construction fee and military service compensation fee. Besides all these fees, they also have to sell part of the grains they produce at a flat rate to the state as a mandatory requirement, and pay agriculture tax, land tax, special local produce tax, and butchery tax in addition to numerous other levies. In contrast, the non-rural population does not pay these fees and taxes.

In the beginning of 2004, China’s Premier Wen Jiabao issued the “No. 1 Document,” stating that rural China was facing the most difficult time since the beginning of the economic reform in 1978. Income for most peasants had stagnated or even declined. They had become poorer, and the income gap between urban and rural residents continued to widen.

In a tree farm in eastern Sichuan province, upper level authorities distributed 500,000 yuan (approximately US$ 60,500) for a reforestation project. The leaders of the tree farm first put 200,000 yuan in their own pockets, and then allocated the remaining 300,000 yuan to tree planting. But as the money was taken away when passing through each level of the government, very little was left in the end for local peasants who did the actual tree planting. The government did not need to worry that the peasants would refuse to work on the project because of inadequate funding. The peasants were so impoverished that they would work for very little money. This is one of the reasons that products made in China are so cheap.

WSJ: 07 March 2006 - There's something for every common man in these legislative proposals: socialized health care, handouts to the agricultural lobby and welfare reform. No, we're not recalling Bill Clinton: we're talking about China's annual National People's Congress (NPC) that kicked off on Sunday. Like Mr. Clinton's last term in office, Beijing's priorities reveal just how uncertain the Communist Party has become -- in power and in ideas.

Mr. Wen soon honed in on the party's newest New Ideas: narrowing the income gap between the urban rich and rural poor, and convincing citizens to spend more and save less. And as a thoroughgoing populist might do, he laid out the goodies: $42 billion in rural spending, $23 billion in welfare outlays, $584 million to health care projects, nine years of free compulsory education for rural youth, the elimination of agricultural taxes, and promises for more infrastructure projects in the countryside, among other things.

Clearly, Beijing's top brass are worried about pacifying the peasants, who are angry about property expropriation, corrupt local officialdom and a significant deterioration in social services. The oft-quoted 74,000 official violent incidents in 2004 probably understates the scale of the unrest.

We'll ask the obvious question: If China's leaders are so concerned about their rural poor, why are so much of the NPC's budget outlays devoted to the military? The party recently announced a 14.7% bump in the defense budget, now officially a $35.3 billion annual outlay and most likely much more in reality, at a time when saber rattling towards Taiwan is growing stronger. ("No one can stop" the reunification, Mr. Wen declared, to applause.)

As for the party's handouts, most probably won't reach intended recipients, thanks to local corruption. Shame. We're not quibbling with the need to bolster health care and education services in China's vast countryside, which lost most of its state-provided social welfare net when Deng Xiaoping's reforms started to truly take hold. We'd even admit that private market mechanisms may not sprout easily in China's more remote provinces.

But for the vast majority in China, now's the time to get economic incentives right. Contrary to popular belief, one of the primary reasons why China's health care reforms haven't worked is because the system wasn't truly privatized. Instead, China simply told hospitals to start charging for their services, without any reference to a true market price. Nor did Beijing allow robust foreign competition. The same goes for education: Beijing hasn't even considered letting a truly private market for schools get off the ground.

As for raising consumption -- a worthy goal, meant to rebalance China's growth away from exports and investment -- surely Beijing could loosen capital controls and let the Chinese invest in foreign stocks and bonds with a decent annual return. Critics argue this can't happen until the banking reform is completed, because domestic banks need the liquidity to keep afloat. But what about all those foreigners who are begging to own more of China's domestic banks? And what better way to encourage fast reform than to let banks compete for business?

The NPC will drag on until the end of next week in Beijing, but its ultimate message is already clear: parties without popular legitimacy have to find ways to buy their citizens' love. That is the rationale of machine politics wherever it's found. The problem is that the greed of the foot soldiers often overwhelms whatever benign instincts the leaders have.