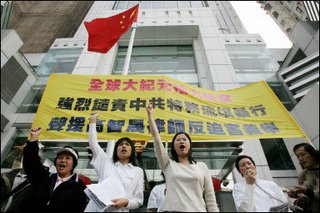 This is just another example showing how the CCP shamelessly behaves like gangsters--inside and outside of China. It's downright outrageous and must be stopped! It is obvious that free speech is what the CCP fears the most. Meanwhile the Epoch Times has revealed the true barbaric nature of the CCP through the Nine Commentaries on 5 continents, 30 countries and in 12 languages.

Asia (AFP) 2 March 2006 - The International Federation of Journalists (IFJ) has accused China of a "brutal vendetta" against independent media following the ransacking of the offices of one of its leading critics.

The Hong Kong office of The Epoch Times, a newspaper linked to the Falungong spiritual group outlawed in China, was broken into by four unidentified men on Wednesday.

They smashed a glass door at the entrance of the building and wreaked havoc in the offices, including entering the computer room in the print shop and wrecking office machines and computers, IFJ said.

"China's authoritarian leaders are maintaining a systematic policy of intimidation and censorship directed against dissident voices and independent media, both inside and outside of the country," said Aidan White, IFJ General Secretary.

"This latest vandalism is part of a brutal vendetta that cannot be tolerated."

Wu believed that the Chinese authorities were trying to stop the paper's ability to print the Nine Commentaries in Hong Kong.

IFJ said the newspaper's employees have been the target of a series of threats and harassment in recent weeks.

The paper's IT director Yuan Li was attacked last month in his home in Atlanta, Georgia in the United States. He was severely beaten by a gang of Chinese men who stole only his work-related computers.

The Epoch Times in Malaysia has been blocked from publication due to the Chinese regime's interference, while its Sydney and Toronto offices have received suspicious envelopes in the post that are suspected of containing toxic materials, the IFJ said.

"This is a vicious witch-hunt aimed at crushing the voice of dissent," White added.

The Epoch Times, which has Falungong members among its staff, often takes a strong stance against China and reports on the persecution of the Falungong, banned in China since 1999 as an "evil cult".

A free newspaper that publishes five days a week, the publication was founded in 2000. It began as a Chinese-language newspaper and later launched an English edition.

It now publishes in 28 countries worldwide including the US and Australia.