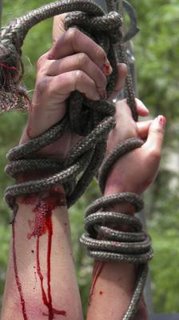 “Nobody has yet come out,” Government Insider Reveals

Below is a related testimony on organ harvesting from Wang Guoqi, former PRC doctor. It is not intended to shock you but rather to put things into perspective while looking at the present situation at the Sujiatun Concentration Camp in Shenyang City. Once again the butchers of Beijing show how unscrupulous they are with emphasis on how the evil specter of the CCP goes against the law of heaven and earth.

(...) Although I performed this procedure nearly a hundred times in the following years, one incident in October 1995 has tortured my conscience to no end. We were sent to Hebei Province to extract kidneys and skin. We arrived one day before the execution of a man sentenced to death for robbery and the murder of a witness. Before the execution, I administered a shot of heparin to the prisoner to prevent blood clotting. A policeman told him it was a tranquilizer to prevent unnecessary suffering during the execution. The criminal responded by giving thanks to the government.

At the site, the execution commander gave the order, "Go!" and the prisoner was shot to the ground. Either because the executioner was nervous, aimed poorly, or intentionally misfired to keep the organs intact, the prisoner had not yet died but instead lay convulsing on the ground. We were ordered to take him to the ambulance anyway, where urologists extracted his kidneys quickly and precisely. When they finished, the prisoner was still breathing and his heart continued to beat. The execution commander asked if they might fire a second shot to finish him off, to which the county court staff replied, "Save that shot. With both kidneys out, there is no way he can survive." The urologists rushed back to the hospital with the kidneys, the staff and executioner left the scene, and eventually the paramilitary policemen disappeared as well. The burn surgeons remained inside the ambulance to harvest the skin. We could hear people outside the ambulance, and fearing the victim's family might force their way inside, we left our job half-done, and the half-dead corpse was thrown in a plastic bag onto the flatbed of the crematorium truck. As we left in the ambulance, we were pelted by stones from behind. Read the full story.

Information about the camp was relayed via audio recording from a former intelligence agent of the Chinese government. It is the first time news of the secret camp’s existence was disclosed to outsiders. The camp is said to hold over 6,000 Falun Gong adherents at any given time, and “nobody has yet to come out” from it alive. According to the source, it contains a crematorium, and an unusually large number of doctors work there—reflecting the camp’s practice of killing prisoners for their organs, which are then sold for profit.

The source tried to convey the horror of what is happening in the concentration camp: “Why was a crematorium built, and why are so many doctors housed there? … The answer is something unimaginable. You must be clear that a cremator for bodies is different than a burner used for sanitation purposes.”

Located in the Sujiatun district of Shenyang city, the camp, dubbed the Sujiatun Concentration Camp, is surrounded by walls three meters high topped with electrified barbed wire. It is heavily fortified and said to be highly secret; locals know close to nothing about it. Those held inside are Falun Gong adherents from China’s three northeastern provinces as well as central China; many are said to have been transferred there from various labor camps. CCP authorities involved with the camp have “learned many things from North Korea,” according to the source.

“This is deeply, terribly disturbing, and confirms our worst fears: that CCP authorities remain intent on ‘eradicating’ Falun Gong, and in their desperation will go to any lengths,” stated FDI spokesperson Mr. Erping Zhang. “We need to be clear that the persecution has not gone away—it has merely become darker and more hidden.”

The Chinese government source spoke at length about the unlawful “harvesting” of organs in the Sujiatun facility. “If Falun [Gong] practitioners are sent to Sujiatun,” he said, “they have no chance of coming out … The CCP won’t let a prisoner consume food forever. So what are they up to, then? … the Falun Dafa practitioners are killed for their organs, which are sent off to various medical facilities. Organ sales is now a highly profitable business in China.”

“They can’t find enough bodies through executions, and no bodies are more readily available for this business than those of the [Falun Dafa] practitioners,” he stated.

Last June CCP authorities reportedly held a “crisis meeting” in which China’s deputy minister of Public Security, Liu Jing, was assigned the job of “stamping out” Falun Gong “before the Olympic Games in 2008,” according to the Paris-based Intelligence Online. Several reports have stated that authorities wish to use the Olympics as a pretext to deepen their assault on the Falun Gong.

This past January Chinese officials similarly announced a “new campaign” that would supposedly “sabotage activities of cult organizations” as part of a “complex struggle against enemies,” according to a Reuters report. Past campaigns to “strike hard” have resulted in upwards of 10,000-plus executions in a single year, say human rights groups.

Word of concentration camps for Falun Gong practitioners has circulated for several years. An October 1, 2000, report by Agence France Presse told of two concentration camps having been recently built, both specifically for Falun Gong detainees. The camps were said to have been built in northwest and northeast China, and been capable of each holding up to 50,000 persons.

An October 6, 2000, report on Minghui.net stated that a concentration camp, expressly for the Falun Gong, had been built in the remote northwestern province of Xinjiang. Chinese sources report seeing Falun Gong adherents shipped off on trains to the Xinjiang camp. Little to no information on the secretive camp has emerged. No one to date is known to have come back from the camp.

Stated Mr. Zhang, “International media and governments around the world must pay attention to this and take active measures to investigate the concentration camp and put a stop to this barbarity and madness. We are calling for all possible support from international organizations. There must be accountability in China. If this is the price people are paying for our silence, it is chillingly tragic.”

Yes, I was doing some research a while back and I found out the the CCP legally changed their method of execution to provide an alternative of lethal injection.

I assume the reason for that was for organ harvesting and make it easier legally according to official Chinese law.

Also, I remember China provides statistically the highest number of people executed per year. But, further to that, we can't assume all executions are reported.

Many of those organs end up in overseas Chinese and overseas Westerners.

Also I remember some articles, the western doctors having some moral conflict about patients coming to them with troubles and finding out that they have had an organ transplant outside the country. (USA).
Inside the country it is illegal, so the doctors are in an ethical and maybe legal dilemma to treat their aliments.

But there is no doubt there is a market for the organs and the West is very complicit.

...how many more shocking news like this one is it going to take before the international community steps forward to stop the genocide/ethocide in its tracks?

The West is complicit in more ways than one.

I find reading this so terribly upsetting. Thankyou though, for posting this information.

I posted on this subject in my political blog