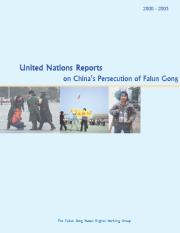 U.N. envoy looks at Falun Gong torture allegations as a third witness reveals the existence of dozens of death camps

This is excellent news. I'm slowly regaining confidence in the UN--a thorough investigation as opposed to a show tour is what I hope for. If the Chinese Communist Party (CCP) were to crush Falun Gong before the 2008 Olympics as they intend to, one might wonder how many more death camps are there? There could be as many as 36 according to Minghui/Clearwisdom. Who will be next? For the lastest reports, look here.

Clearwisdom.net 30 March 2006 - After the first two witnesses exposed the Sujiatun atrocities, another witness who identified himself as "a veteran military doctor in General Logistics Department of Shenyang Military Region" stepped out to point out that Sujiatun underground concentration camp indeed exists, organ harvest is routine there, it is also common to cremate dead bodies and even living people there, yet Sujiatun hospital is only one of the 36 similar concentration camps. (Full report)

GENEVA (Reuters) 30 March 3006 - The United Nations torture investigator said on Thursday he was looking into allegations by the Falun Gong group that thousands of its followers were being held at a Chinese "concentration camp" and some had been killed.

The banned spiritual movement alleged this month that up to 6,000 people at a time were kept at a state-run camp in the Sujiatun district of the northern city of Shenyang, where it said some had been killed and their organs sold.

"The allegation is Falun Gong practitioners are being used for the sale of organs and human tissues ... According to the allegation nobody has so far left this concentration camp," said Manfred Nowak, U.N. special rapporteur on torture and other cruel, inhuman or degrading treatment or punishment.

"I am presently in the process of investigating as far as I can these allegations ... If I come to the conclusion that it is a serious and well-founded allegation, then I will officially submit it to attention of the Chinese government," he told a news briefing.

Nowak, who visited China late last year after a decade of negotiations, reported last week he found torture widespread in the country, home to the world's biggest prison population.

China has denied earlier abuse and torture charges made by Nowak and asked the U.N. envoy to think again.

The Falun Gong bulletin said the allegations were based on "testimony from an insider and formal journalist from China", who also alleged the camp had a crematorium and many doctors.

Nowak, an Austrian law professor, said if the allegations proved true it would be a serious violation of many basic human rights, including the right to life and the right not to be subjected to torture or ill-treatment.

In his report last week he called on China to abolish its "re-education through labour" system and urged authorities to release all political prisoners and people held for exercising their right to freedom of speech, assembly and religion.

This included imprisoned practitioners of Falun Gong, banned in 1999 as a "cult" that threatens the government.

QUESTION: Okay. I would like to switch the topic a little bit. About the recent revealed Sujiatun concentration camp where it is said thousands of Falun Gong practitioners were killed for their organs, what is the State Department's comment about that?

MR. ERELI: Well, obviously, any such reports are taken very seriously by us. We haven't been able to confirm them. We have contacted the Government of China about them. The Chinese have publicly denied the allegations. We've made the point that a further investigation would be helpful. We urge that it be done. So at this point, they are basically unconfirmed reports and we've raised them and we've urged a full investigation.

QUESTION: Did you suggest any international investigation or a third party --

MR. ERELI: No. We've raised it with the Chinese and urged them to investigate.

According to a report from American University entitled:

“Today, China stands alone in continuing the use of organs of executed prisoners for transplant surgery.”1 International organizations such as the World Medical Association and the World Health Organization regard the sale of human organs as inhumane and unethical. These organizations believe it is essential to address all concerns surrounding illicit organ trade and possibly invoke an international trade mandate to which all nations must adhere. Human rights organizations and numerous former Chinese citizens, like Harry Wu, assert that China uses human organs from executed prisoners to sell for substantial profit. The repercussions resulting from the lack of international laws regulating global human organ trade has caused a worldwide upheaval. Human rights issues encircling the illicit human organ trade as well as the effects of this trade in China and globally should be examined and analyzed."

Directorio participates in Falun Gong press conference before the UN

Arizona Senator John McCain, There are times in history when a single act can affect the fate of millions. This is one of those times. You may have seen recent reports http://www.faluninfo.net/ that Chinese authorities are enriching themselves from the sale of human internal organs and that dozens of concentration camp-like facilities are used for harvesting these organs. Reports tell us that China’s repression of prisoners is far more extensive, more brutal, and more horrifying than previously thought.

As a Politician you have some power to REVIEW your position that China never used American Vietnam prisoners for human organ harvesting and that Americans still may be used for such harvesting/breading.