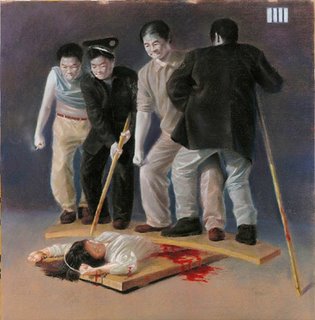 Torture still widespread in China but help is on the way?

It's clear that Nowak was taken through a glossy corridor when he visited the jails in Communist China last year--he mentioned in his report "although basic conditions in detention facilities appeared to be satisfactory"... The CCP (Chinese Communist Party) will never reveal the true picture to outsiders--how could they incriminate themselves to that extent? This showtour had been prepared (and was postponed) for years. Now the burning question is: will anybody listen to Nowak's wise recommendations? Meanwhile look here to read about the real horrible conditions of the Chinese Laogai.

GENEVA, (Reuters) 23 March 2006 - The United Nations investigator on torture has called on China to abolish its "re-education through labour" system, charging that it treated political prisoners in an inhumane and degrading way.

Manfred Nowak, U.N. special rapporteur on torture, also urged authorities to release all political prisoners and people held for exercising their right to freedom of speech, assembly and religion.

His report, covering a rare two-week visit late last year, reiterates his charge that torture is widespread in China -- home to the world's biggest prison population. China has denied abuse and torture charges made by Nowak in December and asked the U.N. envoy to think again.

The 59-page report, posted on the Web site, goes further in its strongly worded recommendations than statements made by him at the end of that trip.

"'Re-education through Labour' and similar forms of forced re-education in prisons, pre-trial detention centres and psychiatric hospitals should be abolished," Nowak wrote.

Groups targeted for re-education were political activists, members of Tibetan and Uighur ethnic minorities and practitioners of Falun Gong, the spiritual group which Beijing outlawed in 1999, according to the Austrian law professor.

Nowak visited 10 detention facilities, holding private interviews with about 30 detainees of his choice.

Many reported that the unjust deprivation of their liberty together with the forced re-education system "caused more severe pain and suffering than the physical torture they might have endured during interrogation by the police", he said.

"Indeed, some of these measures of re-education through coercion, humiliation and punishment aim at altering the personality of detainees up to the point of even breaking their will," Nowak said.

This constituted "a form of inhuman or degrading treatment or punishment, which is incompatible with the core values of any democratic society based upon a culture of human rights".

Nowak also said that although basic conditions in detention facilities appeared satisfactory, he was struck by a "palpable level of fear and self-censorship when talking to detainees".

However, he had "full cooperation" from the government during the visit which the United Nations had sought since 1995.

His report was submitted to the U.N. Commission on Human Rights, but will be taken up by its successor body, the new U.N. Human Rights Council, which opens in Geneva in June.

On a 12-day China trip last year, the first ever by someone holding his position, Rapporteur Manfred Nowak met with four inmates in Beijing Prison No. 2, three in Lhasa Prison No. 1 and one in the Urumqi Prison No. 3 who indicated they had been incarcerated for political crimes, possibly based on information obtained under torture, Nowak's 30,900-word report says, calling for their immediate release.

The Urumqi inmate is Nur Mohammat Yasin, an ethnic Uyghur and author of the book Wild Pigeon. Nowak says he was beaten about the nose. He is serving a 10-year sentence for inciting separatism in the book.

Nowak also appealed for the release of activist and permanent U.S. resident Yang Jianli, who was beaten and handcuffed for two weeks before receiving a five-year sentence in Beijing for espionage and illegal border crossing.

"Since he has been convicted of a political crime, possibly on the basis of information extracted by torture, the special rapporteur appeals to the government that he be released," Nowak writes in each of the eight cases.

However, 66 percent of the 314 torture cases he has tracked in China since 2000 involved practitioners of the banned Falun Gong spiritual movement, the report says.

Ethnic Uyghurs accounted for 11 percent of the cases, human rights activists for 5 percent and political dissidents for 2 percent.

Shortly before the end of his Nov. 20-Dec. 2 China visit, Nowak told reporters that torture had declined in the country, especially in urban areas, but that it remained "widespread."

He said Chinese authorities tried to block his contact with alleged torture victims and their supporters or family members, and the report details some of those encounters.

Officials from the Chinese Foreign Ministry and Ministry of Public Security have rejected Nowak's accusations.

"We have expressed regret and dissatisfaction that the rapporteur could not in all aspects objectively reflect China's real situation of opposing torture," Qin said at a scheduled press briefing.