How San Francisco Kowtows to Beijing 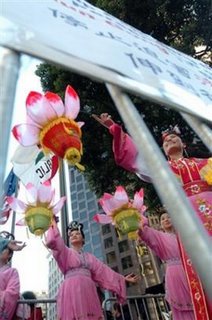 San Francisco (FrontPageMag.com) 01 March 2006 – San Francisco, California boasts its own Human Rights Commission and bills itself as a bastion of tolerance, diversity and inclusion. It didn't quite work out that way when members of Falun Gong wanted to showcase their heritage in the 2006 Chinese New Year parade. They found themselves branded as a “homophobic cult” in the San Francisco Chronicle and banned from the parade. That led some observers to compare the San Francisco experience to what happens in the People's Republic of China, where Falun Gong is persecuted to the point of death.

By the late 1990s, the ruling Communist Party estimated Falun Gong followers at between 70 and 100 million, more members then the Party itself. In April 1999, some 10,000 Falun Gong members sat in meditative poses near the Zhongnanhai security complex that houses Chinese leaders. It was the largest gathering since the Tiananmen Square protests in 1989. Though peaceful, the numbers alarmed the Party enough to begin harassing practitioners of Falun Gong. On July 22, 1999, the regime outlawed the group as an “evil cult” and accused it of “spreading fallacies, hoodwinking people, inciting and creating disturbances and jeopardizing social stability.”

By then Li Hongzhi had decamped to the United States, where Falun Gong also caught on with some Chinese-Americans. By then, the Communist regime in Beijing then deployed its full repressive force, with arrests, imprisonment, re-education campaigns and agit-prop reminiscent of the Cultural Revolution.

Amnesty International has issued a report on the persecution of Falun Gong and Congress has passed a resolution criticizing Beijing's crackdown, which targets members in many countries. Paris-based Reporters Without Borders has documented attacks on Falun Gong members in South Africa, Hong Kong, and Australia, as well as the United States. Three Asian men recently broke into the suburban Atlanta home of Falun Gong follower Peter Yuan Li, for instance, bound him with duct tape, beat him up and stole two laptop computers. A lawsuit in the Supreme Court of British Columbia charges a “campaign of terror” against followers of Falun Gong. Five Canadian residents are suing Chen Zhili, China's former education minister, whom they claim made key decisions and had control over those who carried out torture and persecution.

In former times, the Chinese parade in San Francisco featured the flag of Taiwan, whose nationalist government commanded loyalty of many in Chinatown, along with business owners and politicians. That changed when Dianne Feinstein, now a U.S. Senator, became mayor in 1978. She wanted to encourage trade with China. That has come to pass, along with tolerance for its repressive policies.

In San Francisco, the only official concerned about the persecution campaign is Supervisor Chris Daly. In 2001, he authored a resolution condemning persecution of Falun Gong. It failed to pass, falling to opposition spearheaded by Rose Pak, a former journalist known as the “dragon lady of Chinatown” and reportedly San Francisco’s most powerful person outside of elected office. Pak accompanied then-mayor Willie Brown on junkets to Beijing, where Communist Party bosses accorded them red carpet treatment. Pak is on record that Falun Gong is “mostly gibberish” and “hocus pocus.”

Falun Gong marched in the Chinese New Year Parade in 2004 but San Francisco's Chinese Chamber of Commerce (CCC), which runs the event, excluded them in 2005 on the grounds that some members had handed out political tracts. By some accounts, the motive for exclusion was business interests in the PRC by some Chamber members. Supervisor Daly protested the exclusion by allowing two Falun Gong members to ride his car during the parade.

In the run-up to this year's parade, Daly floated another resolution condemning persecution of Falun Gong. The Chinese consulate issued a statement warning the Supervisors against any decision that would harm relations between China and the United States. The resolution passed 9-2 in a watered-down version that failed to mention the People's Republic of China and took no position on the parade dispute.

The city of San Francisco provides $77,000 in funding for the parade, along with police support and other services. Daly and a few others argued that Falun Gong members should be able to participate in an event their tax dollars supported. Falun Gong practitioners filed a lawsuit and lodged a complaint with San Francisco’s Human Rights Commission. Daly held a hearing on the matter, charging that the Chamber was playing along with a propaganda campaign of the Chinese government that sought to justify persecution of Falun Gong by demonizing the group. The Chamber did just that, in a way particularly suited for San Francisco, with a quarter-page ad in the San Francisco Chronicle blasting Falun Gong as a “homophobic cult” guilty of “hate speech.”

In San Francisco there can be no worse accusation than “homophobic.” Sherry Zhang, a Falun Gong spokeswoman and a chemist from Los Altos, told anybody who would listen that the group has teachings on homosexuality similar to those of Christian groups, but that Falun Gong has never spoken out expressly against homosexuality. It apparently escaped the notice of San Francisco's vocal Homintern that in the People's Republic of China, which has occupied Tibet since 1959, homosexuality is still considered a capitalist vice and that the Communist regime has imprisoned and even executed homosexuals. Chinese persecution of gays, or any of the regime's massive violations of human rights, has never been an issue in San Francisco, which is more agitated by U.S. military recruiters, Abu Ghraib, and even support for the war in Iraq by Nancy Pelosi.

When the Chinese Chamber of Commerce also ran a full-page ad in the Chronicle stating it rejected the Falun Gong’s assertion that “because they are Chinese, they have the right to be in the Chinese New Year Parade,” Chris Daly accused Rose Pak of pushing China’s political agenda. She accused him of tipping off the FBI about her longstanding ties to officials in Beijing. According to the Los Angeles Times, Pak called Daly a “jingoistic, superficial bully,” adding, “Chris Daly should join the John Birch Society. He sees Communists behind every rock and tree.” From Berkeley, Ling-chi Wang of UC-Berkeley's Asian-American studies program told reporters he didn't see any persecution of Falun Gong and said of the group: “They just want to crash somebody's party.”

This topic gained a certain amount of publicity in just about all the San Francisco papers a few weeks ago and below is one of my letters to the (editor) SF Examiner that was published.

Board vote in favour of Falun Gong

I find it appalling that some people will distort the simple QiGong teachings of Falun Gong to fulfill personal achievement or please Beijing...Hmm! It is clear that some Chinese people hate Falun Gong so badly that they will not think twice about spreading lies about this meditation practice. This is not surprising as the whole persecution of Falun Gong in China is based on hate propaganda and fabricated stories by their notorious Central Propaganda Department. Over the years this has been the tactics of most dictators for stamping out the undesirables particularly religious groups. Genocide is the word that springs to mind. The discriminating remarks made by Luo is only one example showing how this persecution has been exported to America and how Chinese people nurture and shamelessly spread those lies. On the other hand Falun Gong makes no bones about telling the truth about how badly their families are tortured in China in an attempt to stop the persecution. THIS has ticked off the Red Barons of Chinatown in a big way. I am looking forward to a colourful and bright Lunar New Year parade, representative of the Chinese-Americans including Falun Gong as participants. Welcome to America!
Posted by MaKina at 11:17 AM

Good blog you have there, keep it up!!!