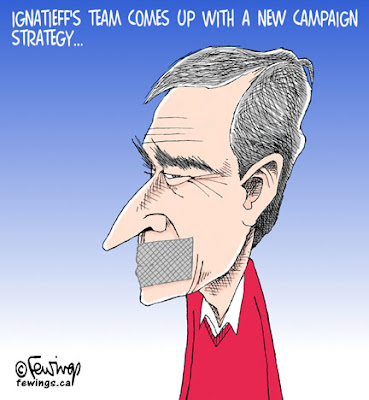 National Post July 6, 2010 - Michael Ignatieff is in China this week, attempting to show Canadians how different this country's foreign relations would be if he were prime minister. If what we've seen so far -- simpering apologies and moral equivalence in the face of China's dictatorship--is indicative, we say, "No, thank you."

When running for the Liberal leadership in 2006, Mr. Ignatieff accused Prime Minister Stephen Harper of indulging in "megaphone diplomacy" for his harsh, public criticism of the Communist regime's human rights record. Mr. Harper refused to make an official visit to China early in his premiership because China was censoring the Internet, stifling democracy and brutally suppressing its critics.

It is reported that China executes three times as many prisoners as the rest of the world combined. And religious dissidents

have insisted for more than a decade (with some video evidence to back their claims) that political prisoners are routinely murdered so their organs can be harvested. If pointing out these atrocities amounts to "megaphone diplomacy," how is one to label Mr. Ignatieff's approach to China? Blind-eyed diplomacy?

Speaking Monday to a group of students and faculty at Beijing's Tsinghua University, Mr. Ignatieff blamed what he sees as the Western world's cultural insensitivity for any strains in the relationship with China. "Western illusions and Western fears have often distorted our image of China," he contended.

Mr. Ignatieff told his Chinese hosts that "in October 1966, as a young student, I helped organize a teach-in on China that attracted several thousand people to the University of Toronto to study the unfolding crisis of the Cultural Revolution ... I learned from that experience how difficult it is to understand China from the outside."

Hundreds of thousands of innocent Chinese citizens were murdered or starved to death during the Cultural Revolution, part of a larger pattern of Communist crimes against humanity that caused tens of millions of deaths. We're not sure why denouncing such crimes is especially "difficult."

According to Mr. Ignatieff, the experts at his 1966 event saw the Cultural Revolution -- an event that even many people in mainland China now regard as barbaric -- as "positive ... the needed renewal of a revolution stifled by bureaucracy." While he acknowledged that "violence and chaos" ensued, he assigned no moral weight or culpability to the Maoist perpetrators' actions whatsoever. Instead, he just moved breezily on to other flatteries of China.

Despite China's ongoing (and often violent) suppression of pro-democracy movements, Tibetan separatists, the Falun Gong spiritual movement, Christian missionaries, Uyghur Muslims and many others, Mr. Ignatieff believes China has made more progress in human rights in the past 10 years than any other nation, Canada included. "Neither of our countries has a flawless past or present," he insisted -- as if there could be any comparison between a democracy such as Canada and a one-party dictatorship such as China.

He even took some time out to slam Canada on foreign soil, declaring that a "gap" exists between Canada's ideals and "reality for some of my fellow citizens." Beijing propagandists were no doubt busily taking notes.

Mr. Ignatieff clearly knows better. While teaching rights theory at Harvard University, Mr. Ignatieff routinely cited China as one of the worst rights-abusers in the world, lumping it in variously with North Korea, Libya, Saudi Arabia and others. But now he leads the party of Pierre Trudeau and Jean Chretien, men who made a habit of "engaging" China, while at the same time ignoring its right record. Mr. Trudeau even toured China during the height of the Maoist purges, but never once makes mention of them in his travel memoirs.

Mr. Ignatieff now seems eager to return to his weak-kneed roots and take on the see-no-evil mantle of his Liberal predecessors. This may gain him a few votes, but is a denial of the torture and terror China inflicts on all those

it punishes for their thoughts. It is a sad and somewhat pathetic moment for a political leader who once was sold to the Canadian public as an icon of principle, and an expert on human rights.