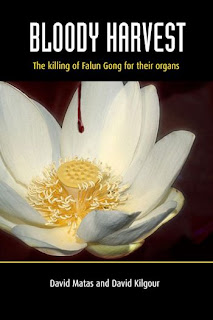 As the lingering rumour that the regime in China is harvesting organs of living people in detention continues to circulate, the Irish Government has called on the EU to investigate

"I have instructed my Department to raise the issue at EU level, to liaise with EU Member States in investigating the allegations, and to seek a response from the Chinese authorities."

...This latest statement from the Minister follows on from a number of briefings that David Matas and David Kilgour made to the Irish Government starting in 2006. Mr Matas a prominent human rights lawyer and Mr Kilgour a former member of the Canadian Government conducted an investigation into the harvesting of organs of Falun Gong practitioners in China, in which they concluded that it was their belief that organ harvesting was ongoing.

In the Kilgour/Matas report Bloody Harvest it says,

"We have concluded that the government of China and its agencies in numerous parts of the country, in particular hospitals but also detention centres and ‘people’s courts,’ since 1999 have put to death a large but unknown number of Falun Gong prisoners of conscience. Their vital organs, including kidneys, livers, corneas and hearts, were seized involuntarily for sale at high prices, sometimes to foreigners, who normally face long waits for voluntary donations of such organs in their home countries."