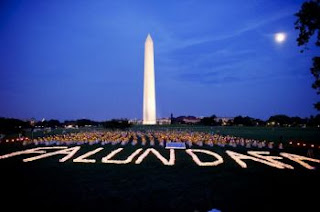 Congressmen Call for End to 11-Year Persecution of Falun Gong

Epoch Times: WASHINGTON—On the West Lawn of the U.S. Capitol at high noon on Thursday, about 500 Falun Gong (also known as Falun Dafa) practitioners from around the world gathered in protest of the Chinese Communist Party’s persecution of the meditation practice for the past 11 years.

Members of Congress, human rights activists, and Christian organizations joined offering their support for a new dawn of religious freedom in China.

“That is absolutely despicable,” shouted Rep. Smith. “[Those who] cherish freedom must speak out against the brutality and hate that everyday manifests by the dictatorship of Beijing.”

Rep. Ros-Lehtenin said that the “Chinese communist regime’s obsessive and relentless hunting down of practitioners of Falun Gong” is “one of the most flagrant examples of systematic persecution in the 21st Century.”Ros-Lehtenin was the author of H.R. 605 which called upon the Chinese regime to cease its campaign against Falun Gong practitioners and abolish the 6-10 office, which is given the mandate to "eradicate" Falun Gong. The resolution also called for the release of Falun Gong practitioners from prisons and reeducation through labor camps. It passed in March, overwhelmingly, 421 to 1.

Congresswoman Ros-Lehtenin said nothing had changed in the last four months since her resolution passed.

“The persecution of Falun Gong is barbaric, bloody, and brutal, and it must come to an end at once!”

Watch a video of the Celestial marching band here

Another video of the Falun Gong story here

Take a look at the Photo Gallery here

One more report from Quotidian Dissent
Posted by MaKina at 6:35 PM