Over a hundred people gathered in front of the Chinese consulate in San Francisco on Friday, united by a message: "Chinese consul, immediately stop interfering with Shen Yun [...]

Ms. Wang quoted a defected former Chinese Consulate official, Chen Yonglin, who testified in front of US Congress on July 21, 2005. Mr. Chen said that the Chinese regime’s ‘struggle’ against Falun Gong “is one of the main tasks of the Chinese missions overseas,” adding that there is a special group focused on Falun Gong in every overseas consulate.
More at The Epoch Times
Posted by MaKina at 10:41 AM No comments:

A diplomatic cable made public by WikiLeaks late last year may shed light on what lay behind NTD Television's ejection from NASDAQ. 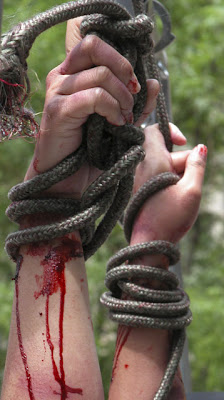 The Chinese Communist Party's ongoing persecution of the Falun Gong spiritual practice continued to take away lives in 2011. Rights groups have documented ... More at NTDTVcom

Posted by MaKina at 7:01 PM No comments:

Chinese consular officials continue to attempt to thwart the performances and success of Shen Yun around the world. This time government officials in Seattle have been targeted. In a letter dated Jan. 18 Gao Zhangshang, the Chinese Consul-General in San Francisco, asked a Seattle City Council member not to provide a proclamation or letter of support for Shen Yun, not to attend the performance, nor give interviews to media about Shen Yun. The name of the council member who provided the letter is being withheld at the member’s request. (Letter published below)Shen Yun is scheduled to perform in Seattle’s Marion Oliver McGraw Hall on Feb. 7 and 8.

Since Shen Yun first began performing in 2006, the Chinese regime has sought to interfere. On a blog titled “Who’s Afraid of Shen Yun?” Leeshai Lemish, an emcee for the performance, has documented 46 cases of interference in 20 countries that have taken place since 2008. The incidents run the gamut from the slashing of bus tires in Ottawa to the threat to withhold loans promised by the Chinese regime to the Moldovan government.

Lemish believes that the Chinese regime seeks to block the performance because Shen Yun typically includes one or two acts that depict the persecution of Falun Gong in modern-day China.

Gao Zhisheng May Already Have Died From Torture, Says Wife

Gao Zhisheng is known as the “Conscience of China” for his defense of persecuted religious groups, including practitioners of Falun Gong and house church Christians. Beginning in late 2006 Gao was regularly kidnapped, beaten and severely tortured by ...

...boundaries, who are continually subject to raids, arrests, and detention," he said in his prepared remarks. "We see Falun Gong practitioners, Tibetan Buddhists, and Uyghur Muslims face harassment and physical intimidation. These abhorrent acts fly in the face

More at The Windsor Star
Posted by MaKina at 6:17 PM No comments:

Foreign spies have always found something worth stealing or buying in Canada, but the arrest of a Canadian naval officer for espionage is somewhat rare. At least, it's hard to recall a similar incident involving someone in the military. In fact, very few...

In addition to seeking corporate secrets, the agents were reportedly in Canada to intimidate members of the Falun Gong, a dissident religious group banned in China.

Posted by MaKina at 7:12 PM No comments:

Chinese New Year--Celebrate or not

However, January 23 is a black day in the memory of more than 100 million Falun Gong practitioners in all countries of the world and for all Chinese people who were deceived in China.

On January 23, 2001, the Chinese Communist Party's mouthpiece-newspaper stated that five Falun Gong practitioners set themselves on fire in Tiananmen Square. The then CCP leader, Jiang Zemin, immediately delivered videos of those poor people in flames to every head of state in the world and media to promote his orders to persecute and eradicate practitioners of Falun Gong saying that they were criminals among other things.

Reporters later proved that the people involved never practiced Falun Gong. This incident became known as "False Fire". It is chilling to watch www.falsefire.com and more chilling to realize that it was a set up by the CCP who controls the Chinese government and media.

More at MWC
Posted by MaKina at 2:28 PM No comments:

China is living through an intellectual and creative dark age. While the nation's economy booms and consumer culture thrives, the totalitarian government has "overhauled" the nation's arts communities to bring them in line with its political dogma. Historical relics and traditions have been destroyed or suppressed because they are seen as obstacles to progress. Yet 5-millennia-old tradition in a country of more than 1 billion people dies hard, and there is an active resistance. This week its name is Shen Yun. The New York-based arts group, whose name translates to "the beauty of divine beings dancing," was formed in 2006 to preserve and present traditional Chinese dance and music. It now has more than 200 performers, including dancers, vocalists, and an orchestra. It performs at the War Memorial Opera House through Sunday. ​Among the instruments used is the two-stringed erhu, sometimes called the Chinese violin.

Shen Yun employs stunning costumes, sets, and dance moves, and uses bilingual hosts and subtitles to explain the content of the pieces. Its online FAQ answers questions such as "What should I wear?" and "Why would I enjoy a Chinese show?"

Some people have criticized the group for covertly promoting the dissident Buddhist spiritual practice known as Falun Gong. But based on what we know about this sect, the worst that might happen is you begin to pursue better health and spiritual enlightenment after seeing an amazing show. Sounds like a good start to 2012 to us.

More at SFWeekly
Posted by MaKina at 6:51 PM No comments:

Vancouver Courier - Apart from the flagrant attempts to influence Canadian politicians by the Chinese Communist Party, I'd like to draw attention to another aspect of the article.

Using artistic expression to share spiritual belief has been common since the dawn of history. Christianity inspired most of the great art of the West, such as the world famous painting of the Sistine Chapel to give one example. I am sure many of us enjoyed the masterpieces of Handel (The Messiah) and Schubert (Ave Maria). Such are the riches bequeathed to a multifaceted society that offers freedom of belief.

Before the Chinese Communist Party violently enforced its own state religion of atheism upon the Chinese people, there was a rich spiritual environment of Buddhism and Taoism. The CCP's Cultural Revolution saw the mass destruction of monasteries and temples, and the public humiliation, torture and murder of monks, nuns and other spiritual believers. Unfortunately, these barbaric practises have not gotten any better in the 21st century as witnessed by the violent suppression of Falun Gong practitioners, Christian house leader Uyghurs and Tibetans, plus any Chinese people of conscience who would support them. Using the power of art to expose persecution has been used by many valiant causes, many of which have been supported by Amnesty International.

The mission of Shen Yun is to revive 5,000 years of divinely inspired Chinese culture. After more than 60 years of Communist rule in China, however, Shen Yun is showing that the deeper spiritual core of the ancient Chinese culture, with its values of benevolence, honour, propriety, wisdom and sincerity, as well as a reverence for the gods and the heavens, cannot be destroyed.

Vancouver Courier (Canada) - Why am I not surprised. A Chinese official again tries to interfere in Canadian affairs, this time by asking Mayor Robertson not to attend the Shen Yun Performing Arts show. This is par for the course for Chinese consulates around the world when it comes to anything related to Falun Gong. They don't like Shen Yun because, in part at least, it uses art to expose the repression of Falun Gong and the horror Falun Gong practitioners go through in Chinese jails. Through the Cultural Revolution and other violent campaigns, the Chinese government gutted the traditional culture of China, and Shen Yun is reviving it. Beijing doesn't like that either, so they try to interfere with the show and bad-mouth it. The good news is, nobody really listens. From what I know, many government officials have gone to the show even though they received letters similar to Robertson's. Good for them for not allowing themselves to be bullied by a dictatorial regime.

Posted by MaKina at 6:42 PM No comments:

Since 1999, the regime has focused its powers and resources on a ruthless and systematic campaign against Falun Gong practitioners in an attempt to eradicate the group. But Falun Gong practitioners have held firm to their beliefs and have continued to expose countless injustices through peaceful means. Their spirit of compassion and tolerance manifest the very essence of China’s 5,000-year-old divine culture. Thus, it is not that Falun Gong itself is political, but rather the communist regime is utilizing political means to persecute Falun Gong and silence anyone who wishes to speak about it.

Posted by MaKina at 9:34 AM No comments:

BEIJING — The United States government has called on China to release Mr. Gao, who once defended practitioners of Falun Gong, a banned spiritual group.The brother of a prominent dissident and rights lawyer who had been missing for 20 months said Sunday that the lawyer, Gao Zhisheng, was being held in a prison in the remote western region of Xinjiang. The brother, Gao Zhiyi, told two news ...

More at the New York Times
Posted by MaKina at 3:45 PM No comments: